From Wikitech-static
< WMDE‎ | Wikidata
Jump to navigation Jump to search

This page provides a brief overview of Server-side Rendering Service[1].

The service was introduced in 2019, to initially serve server-side rendered content of the Wikidata/Wikibase "term box", i.e. the part of item/property page UI where labels, descriptions and aliases are shown and could be edited.

The service is used as part of generating the HTML output sent from MediaWiki to user's browser.

There is a server-side and the client-side variant of the code, which are distributions of the same implementation.

The client-side variant is deployed into wikibase on a file system level through git sub modules.

In case of no configured server-side rendering service or a malfunctioning of it, the client-side code will act as a fallback.[2]

The SSR service is a node service. It is written in TypeScript. The code is "compiled" to JavaScript using webpack. The "compiled" code and "compiled" CSS is to be found in the dist folder of the git repository.

The service uses Vue.js as the UI framework.

The images that are used in production can be found on the WMF docker registry which is missing a nice UI; the easiest way to see current images is this tool. New images are built, after code is merged to the master branch, automatically by the deployment pipeline.

The instance used for beta is just run by docker. The configuration for this can be found in the git repo in the infrastructure folder. The instructions for applying those changes can also be found there.

Some useful metrics for monitoring the deployment can be found shown in grafana. 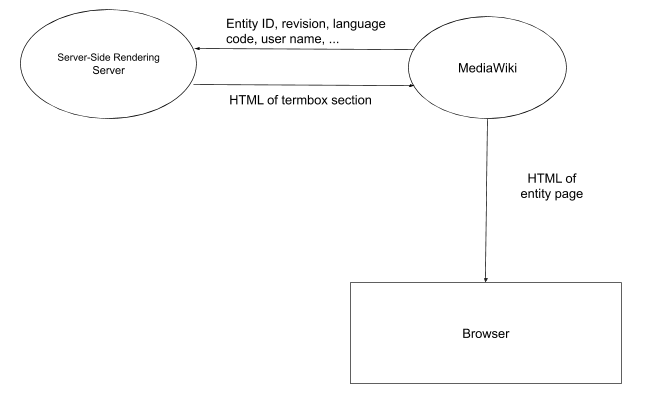 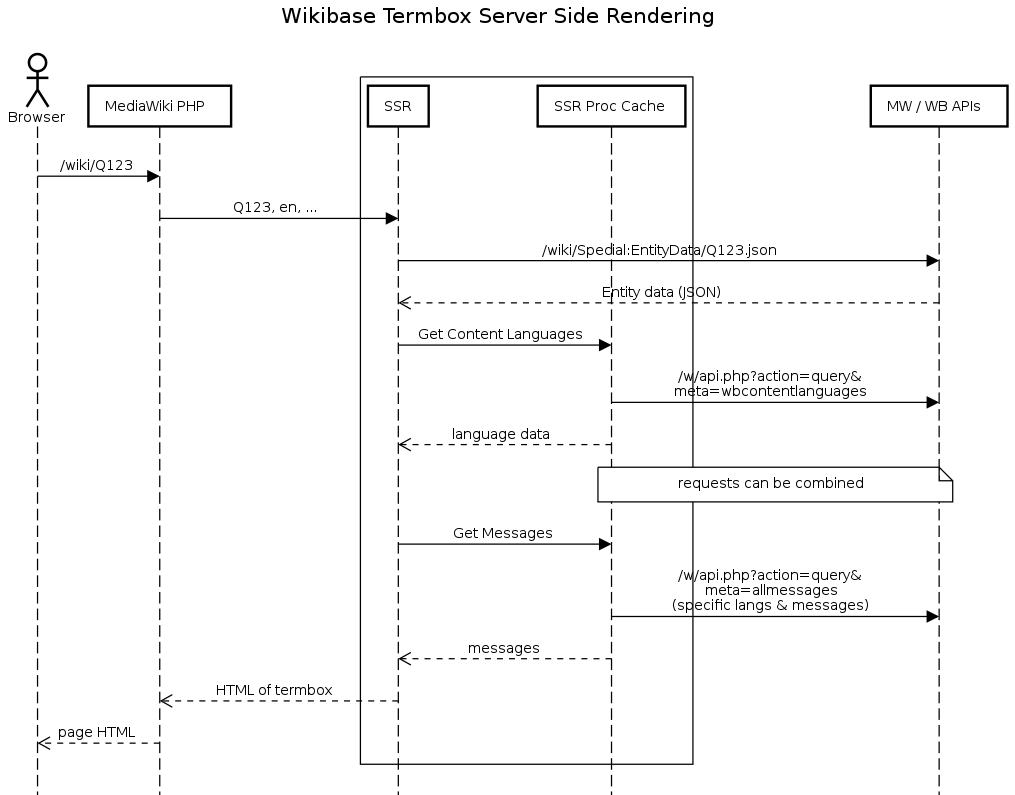 The initial responsibility of this service will be the rendering of the term box for wikidata items and properties for mobile web views.

Currently wikidata.org gets no more that 80k[3] mobile web requests per day (including cached pages, and non item/property pages).

If we were to assume all of these requests were actually to item and property pages that were not cached this would result in this SSR service being hit 55 times per minute.

(In reality some of these page views are not to item or property pages, and some will be cached) so we are looking at no more than 1 call per second.

The Service Level Objective (SLO) for the Termbox SSR is an error rate of less than 0.1%. The current error rate and numbers of errors can be seen at the Grafana Termbox SSR SLO dashboard.

That availability is impacted by errors triggered inside Termbox SSR (i.e. the NodeJS app living in Kubernetes) that are caused by operational or performance issues in MediaWiki. They are unavoidable to a degree and acceptable as long as their overall frequency stays low, see the SLO above. The bulk of those errors is constituted by the following three error messages:

These errors are discussed in more detail in a Phabricator comment. Detailed descriptions of them are visible on logstash. Note that there seems to be a bug in how Prometheus calculates the numbers shown in Grafana, so they can diverge from what is shown in logstash.

To connect to the production services for testing use ssh port forwarding as follows:

You can alter the bastion host as needed. You can also alter the service e.g. eqiad vs codfw.