From Wikitech-static
< User:Nskaggs
Jump to navigation Jump to search

Reference the following tickets or similar

The virtual machines inside the CloudVPS virtual network use private addressing in the 172.16.0.0/21 range. When virtual machines contact the outside internet, there is a NAT mechanism in the Neutron virtual router that SNAT the traffic using a public IPv4 address (for example nat.openstack.eqiad1.wikimediacloud.org). In our setup, we refer to this address as the routing_source_ip. We also have a feature called floating IP, which associates a VM instance with a public IPv4 address. This floating IP address will be used for all ingress/egress traffic by the VM instance.

Traditionally, we had the need for VMs to contact some WMF prod internal services directly, without NAT being involved. This is, so WMF services know the particular VM instance using the services. We implement this NAT exclusion by means of a mechanism called dmz_cidr. Currently, some of our services, like NFS, relies on this setup to have proper control about VM usage of the service.

The Neutron virtual router is implemented by means of a Linux network namespace in cloudnet servers. The different netns are dynamically managed by Neutron which should then be configured and operated using the openstack networking API and CLI utilities. All the routing, NAT and firewalling done by Neutron is using standard Linux components: the network stack, netfilter engine, keepalived for high availability. etc.

The current CloudVPS network setup is extensively described in the Neutron page. This includes documentation about both the edge/backbone network and the internal software defined network. 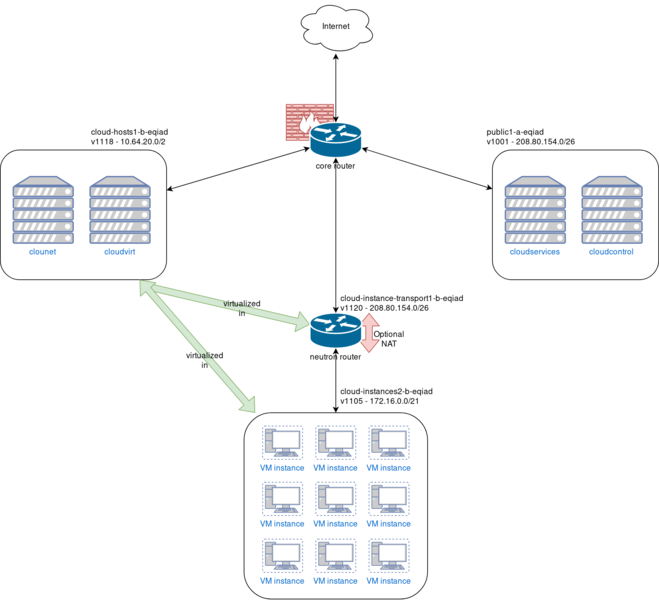 We are currently using the neutron virtual router as the edge router for the CloudVPS service internal virtual network. This is against upstream openstack design recommendations, as can be seen in some docs. Moreover, this has proven challenging for proper CloudVPS network administration, given we don't have enough configuration flexibility in Neutron for managing the virtual router as a general purpose network gateway.

Additionally, for the current setup to work, we have custom code customization in Neutron. Basically the code customization was introduced to make Neutron behave like the old nova-network openstack component behaved. This was a requirement during the nova-network to neutron migration that was done years ago, but it is no longer required. The code customization is a pain point when upgrading openstack versions, given we have to rebase all the patches and test that everything works as expected, adding unnecessary complexity to our operations.

In an ideal model, Neutron would just do what it was designed for, which is enable software defined networking (SDN) inside the cloud. Neutron wasn't designed to act as the edge router for an openstack-based public cloud. So, if we offload/decouple some of the current Neutron virtual router responsibilities to an external server, we would be effectively reducing technical debt from the CloudVPS service point of view.

The current setup has some flaws in the CloudVPS/prod separation topic.

Currently, CloudVPS internal IP addresses reach production network, without NAT being involved. This is by means of a mechanism called dmz_cidr which is part of our neutron custom code customization. There are some long overdue revisions to this, as can be seen for example in phabricator T209011 - Change routing to ensure that traffic originating from Cloud VPS is seen as non-private IPs by Wikimedia wikis. Neutron is controlling this NAT, and as described above, this cannot be easily changed with enough flexibility. Therefore first step would be to address this lack of flexibility. Again, offlading/decoupling the edge NAT/firewalling setup from Neutron feels like the right move.

Enabling more network separation between prod and the CloudVPS network could help us to eventually relocate some important services like storage (NFS, ceph) and others into CloudVPS own network.

prepare for the future

We feel that investing proper engineering time in the network architecture is long overdue in the cloud realm. We pretty much need to invest some engineering time here to ensure we prepare the ground for the future of our public cloud. This includes introducing technologies we don't currently use, like IPv6 and BGP, and brand new cloud features like Neutrn tenant networks.

It is widely accepted that the future of the CloudVPS service is completely separated from the prod architecture, and therefore any engineering time to move in that direction would be more than welcome.

In the current architecture, with Neutron acting as the edge router for the CloudVPS virtual network, we are forced to use the Neutron API and other openstack abstraction (the very openstack design can be seen as an abstraction itself) in order to manage what otherwise would be a very simple setup. We would rather use standard linux utilities to directly manage certain components, like routing, addressing, NAT/firewalling, etc.

Since all the Neutron configuration lives in a mysql database, with no external RO/RW access, and the Neutron API itself is strictly restricted, external contributors have reduced chances to learn and contribute about our setup. This is something we would like to improve. Using git operations, like in our current puppet model or similar, is a much friendly way of welcoming and engaging technical contributors.

We also identified the need to follow more closely what upstream Linux communities and projects are doing, instead of cooking our own stuff. The Neutron custom code customization we have is just one clear example of us not following upstream patterns.

In FY19/20 Q4, new dedicated switches were procured for the WMCS team. These switches, called cloudsw1-c8-eqiad and cloudsw1-d5-eqiad, are already racked and connected. We refer to them generically as cloudsw. We can leverage these dedicated switches to improve our edge routing by introducing advanced L3 setups based on OSPF and BGP, and improve our general L2 VLAN management and setup. This, again, is the right move in the long road of an eventual full separation from the prod network.

A. Remove physical and logical dependency on eqiad row B (asw2-b-eqiad)

Because of historical reasons and technical limitation in OpenStack, WMCS only grew in eqiad row B.

Our current eqiad HA design is done per row, which mean production (core) services aim to be equally balanced between the 4 rows we have in the datacenter.

Since its initial deployment, WMCS grew significantly, competing in term of rack space and more importantly 10G switch ports in that row.

Providing dedicated L2 switches and progressively moving WMCS servers to them (as they get refreshed) will eliminate those issues.

The way WMCS grew within the production realm is a snow flake compared to the industry best practice of having a PE/CE interconnect between functionally different infrastructure. This "snowflakiness" and lack of clear boundary brings a few issues:

Configuring the above mentioned switches to additionally act as L3 gateway will help solve this issue in the long term, while providing the tools (eg. flow visibility) to fully address it in the long term.

As mentioned in (A), all the WMCS are hosted on the same virtual switch. Which mean maintenance or outage takes all WMCS hosts offline.

Due to (A) and (B), all changes to the WMCS foundations (network or other) have been challenging as they either require tight synchronization between several teams, or could cause unplanned issues due to unexpected dependencies.

There are 2 new devices in this architecture: cloudgw and cloudsw

Why use a linux gateway and not dedicated network hardware?

Use a single L3 device

There is 1 new device in this architecture: cloudsw

Those two independent parts will move in parallel to eventually be integrated together:

This is due to not having the required equipment for staging cloudsw in codfw, as well as the urgency of solving some of the mentionned issues in eqiad where they are present.

In any case, a rough timeline of the changes in eqiad is the following:

These improvements are intended in future work, but not explicitly in scope for this proposal