Hey, how about using the discussion page :-P

Since we are committing to doing everything from puppet disable to power off in one shot (not in days but in an hour let's say), no point in waiting for the daily storedconfig cron cleanup job based on decomm.pp. So I removed that, and added some comments later about how we don't rely on that mechanism. We want to get away from that anyways since this file is eventually to be tossed.

Fixed order: we remove from puppet manifests etc before we disable puppet on the host. And we can do any of those removal steps and stop in the middle before we commit to the process leading to power off.

In theory one could write a script that did puppet disable/storedconfigs clean/remove cert/remove salt key and do all that with one command. This would make it impossible to back out if there were issues with icinga refresh but if we ensured that there wa always someone who could look at and fix those issues when this script is run, that would be ok. Note that puppet node clean (available from puppet 2.7.10 on) removes the cert and cleans up exported resources, so we should start using it instead of puppetstoredconfigclean.

Netbox will replace Racktables, the following one is the proposal to adapt our current Server Lifecycle to the introduction of Netbox

Those are the currently available statuses in Netbox:

Only the high level overview is described here, it will be integrated into the page itself. 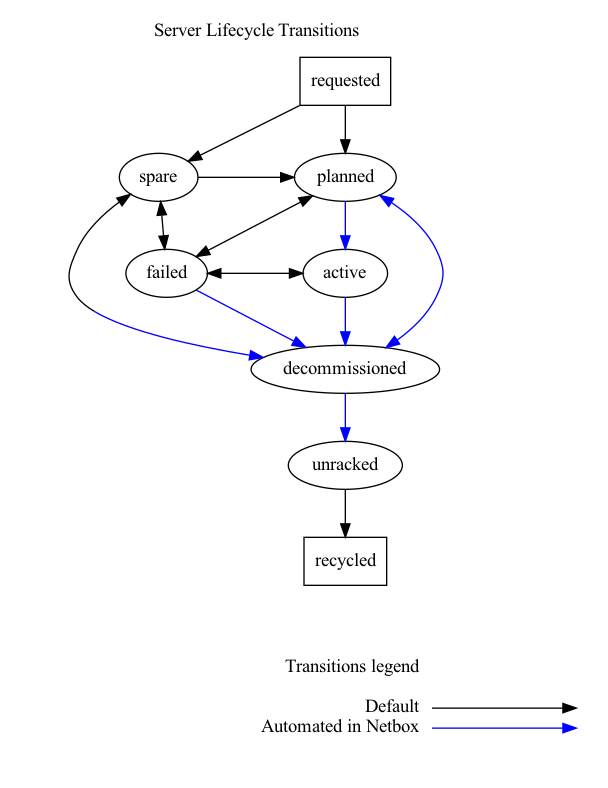 This transition should be used when reimaging the first host of a cluster into a newer OS that will likely need to be tested extensively before putting it back in production. It can be used also in other occasions when a rollback of the STAGED -> ACTIVE transition is needed.

Changes to be made to the page sections

This is a minimal list of required changes to be made to this wiki page to include the Netbox steps. We can then restructure the page to follow the above lifecycle statuses.

The documentation here is not showing realitiy- the stages on netbox are not the same as the ones mentioned here. It would be nice whoever maintains netbox or this docs to review it and sync it.