The api-appserver cluster has been overwhelmed with expensive parsoid-batch calls from particular pages, resulting in brownouts and frontend availability at ~97%.

The mediawiki API has suffered the most impact, with internal services and external API users impacted as well. See API frontend graph, the slowdown was severe enough that a depression in request rates was observed. 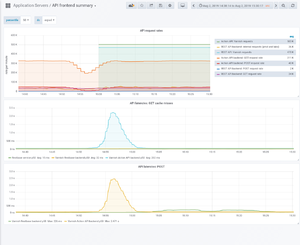 Alerts for appservers "high CPU" went off on IRC during brownouts through the first half of the day (6-12 UTC) followed by general widespread alerts for affected internal systems (restbase, recommendation, mobileapps alerts went off) starting around 15 UTC

API appservers are susceptible to storms of many long-running parsoid-batch requests, in particular external requests which end up exhausting the cluster's resources and affecting all API users.

An outage condition was identified quickly, and investigation began quickly.

The cluster recovered by itself once requests ended and recovery has been fast.