On April 2nd a pyspark (Apache Spark on Python) job launched on Hadoop caused two data-loss events for Varnishkafka. The job was using a very old Kafka client protocol, forcing the Kafka brokers to use extra heap memory to convert Kafka messages from one protocol to the other, eventually causing Java OutOfMemory exceptions. This instability in Kafka brokers caused lag in replication and temporary unavailability of some Kafka topic partitions, that caused Varnishkafka delivery failures (worst possible event for Analytics, since it means data not-delivered/dropped). The recovery was done after a (partial) roll restart of the Kafka Jumbo cluster. This action left the cluster into a suboptimal state, namely imbalance in number of topic partitions leadership role assigned to brokers; it was eventually fixed a day later with a manual rebalance of the cluster via the kafka preferred-replica-election command.

Post mortem of this event with plenty details is here: https://phabricator.wikimedia.org/T219842

On every caching host (cpXXXX) there are one or more Varnishkafka daemons that read HTTP requests registered in the Varnish's shared memory log, format them following a json schema and then finally post them to the appropriate Kafka Jumbo topic. Several Analytics' Kafka consumers (like Eventlogging, Camus, etc..) will then pull the data to process it accordingly.

Varnishkafka leverages librdkafka to produce events/messages to Kafka, but it is an async client: librdkafka in fact immediately returns immediately to Varnishkafka when called using the async send API, but in reality all it does is simply adding the message to a queue and then send groups of events/messages in batches. If Kafka returns failures for a certain amount of time (either too many retries or the messages have been waiting for too long in the queue) then the delivery report failure callback is triggered, ending up in an increase in the related Graphite metric.

During these time frames the Kafka brokers were experiencing Java OutOfMemory exceptions, leading to replicas being not in sync and topic partition leaders not accepting traffic for brief amount of time. The major impact was of course to Kafka producers like Varnishkafka, that are also very sensitive to latency variations due to the amount of traffic handled. The loss is higher on Eventlogging's data (as per schema Kafka topics have only 1 partition), and smaller on Webrequest topics. Every callback error on this graph is an event that was not able to be posted to Kafka: 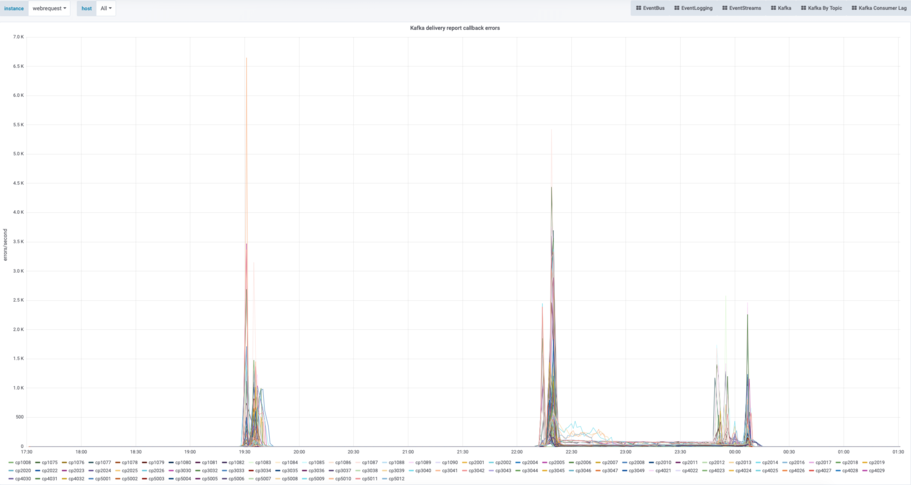 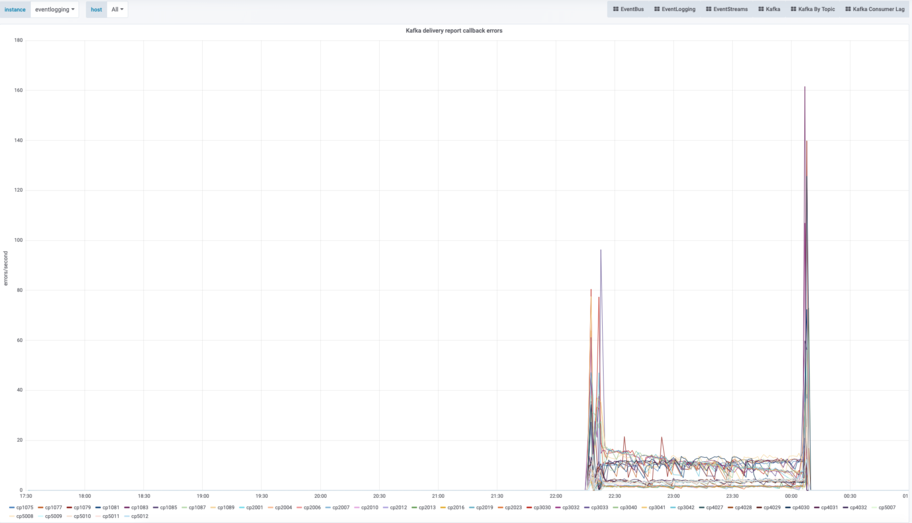 The Analytics team is currently working on a procedure to attempt to recover Eventlogging's data. This is possible since Varnishkafka produces events only to a topic called eventlogging-client-side on Kafka Jumbo (spanning several partitions of course). The Eventlogging daemons (running on eventlog1002) consume from that topic, identify and validate the events/messages and produce them to specific Kafka topics (corresponding to different Eventlogging schemas). Since the more specific Kafka topics have only one partition (replicated three times as the rest) it is easier that a broker failure causes more impact compared to a topic spanning multiple partitions. The recovery of data is possible up to the amount of data loss registered for the eventlogging-client-side topic of course.

Monitoring worked well in this case and, as Kafka cluster slowly recovered, so did the alarms.

There are several interesting considerations to make, most of them probably leading to follow ups:

There are clearly a lot of follow ups needed (as outlined in the above section) but there are also some nice things to consider:

Spreading the knowledge about Kafka is also essential, the more SREs with experience on it the better for the future given how many important Kafka clusters we run nowadays.