(From Antoine's email to mediawiki-l)

To long, not willing to read: our MediaWiki configuration did not trust X-Forwarded-For headers sent by the media server and ended up throttling them instead of the end users.

Error generating thumbnail
As an anti-spam measure, you are limited from performing this action too many times in a short space of time, and you have exceeded this limit. Please try again in a few minutes.

Nemo Bis confirmed a few hours after that the error is widespread and impacts commons as well. That is not surprising since the thumbnails rendering infrastructure is shared among wiki projects.

On Sunday May 4th, Nemo mentions some rate limiting configuration has been added for the "renderfile-nonstandard" throttle and deployed on April 21st ( https://gerrit.wikimedia.org/r/#/c/127643/ )

The IP are the media server frontends ms-fe1001 to ms-fe1004 which relay thumbnails generation requests on behalf of users. We want to throttle per end user client IP or username, NOT the proxies.

My assumption is that the media servers do not relay the end user X-Forwarded-For header which contains the end user IP.

I look at the Swift proxy rewrite.py script and find out that X-Forwarded-For seems to be handled in there. I ping Faidon and he immediately confirmed X-Forwaded-For header is properly handled by the Swift proxies via rewrite.py and suggest that the media servers are not listed in MediaWiki configuration as trusted proxies.

Additionally add a comment in Puppet configuration to remember folks to update the trusted proxy list whenever a new proxy is added:

The media servers disappear from limiter.log

Nemo detected the throttle configuration has been added to mediawiki-config on April 21st and deployed that day: https://gerrit.wikimedia.org/r/#/c/127643/

The throttle has been merged in mediawiki/core master branch on April 21st as well https://gerrit.wikimedia.org/r/126052 sha1: 4f2324fc

MediaWiki change landed in 1.24wmf2 which

"Instantly" causing the media server to be throttled.

What can be improved

The throttling is handled by User->pingLimiter() which has a profile in entry point. Hence it generates a count metric in graphite as MediaWiki.User.pingLimiter.count

I have generated a graph from January 1st 2014 till today and uploaded it on wikitech: 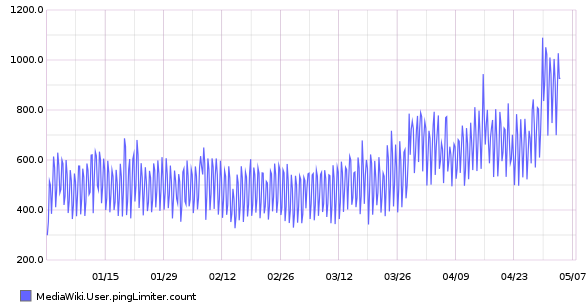