Analytics play a large role in the annual fundraiser and we utilize a very simple and light weight system to capture how a user moves through their workflow.

A good example of this is Notice37. If you look at the template definition you will see a section of code that looks like the following 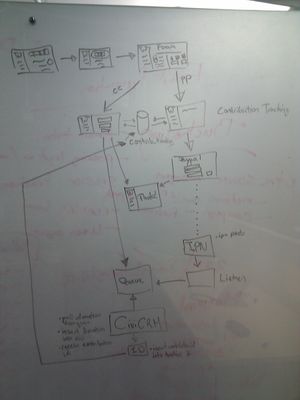 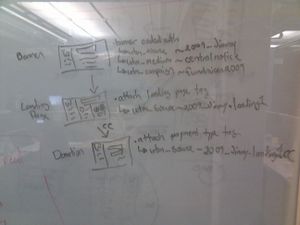 Once a user clicks on this banner they are taken to the landing page configured under the notice variable. Each landing page is coded with the following js script

This code has important actions. One is to pull the name of the landing page and affix it to the utm_source. The second is to affix a payment method once a user clicks on either paypal or credit card.

Within each step were simply affixing our tracking identifiers. If a user gets to the landing page but then chooses to browse another page like five facts then we automatically lose the name the banner that they arrived with.

During the 2009/10 fundraiser we made use of variable landing & appeal page tracking by first coding the banners as stated above but changing the utm_medium variable on any appeal page. Effectively we modified the url to be

once a user loaded an appeal page.

PayPal transactions are recorded in payment instrument bit of the utm_source as 'pp'.

If a user clicks on PayPal then their data is first posted to the ContributionTracking extension and recorded. At this point we do not yet have a contribution id to insert as the transaction is not yet complete.

Recurring payments using PayPal are recorded in the payment instrument bit of the utm_source as 'rpp'.

Currently, we are only queueing messages we receive for recurring payments in ActiveMQ. We will eventually be integrating the data with CiviCRM.

Recurring payments using PayPal are recorded in the payment instrument bit of the utm_source as 'cc'.

If a user makes it to our donation gateway then their session is recorded upon first page load. We insert an entry into the contribution tracking database and retain that id as a hidden form field across all trxn's within the session. Subsequent page loads will not retrieve a new tracking id for the same user workflow. If a successful donation is made then the contribution is pushed onto our processing queue and will later be picked up by queue2civicrm for processing. Just as with PayPal our queue software will match up the entry in the contribution_tracking database by matching the tracking id present in the record.

Results of tracking can be viewed on foundation wiki and are grouped by date. Every banner entry has to be white listed in wmf-deployment/wmf-config/CommonSettings.php as it is not uncommon for noise to enter the system.

It is very important to know that data can go missing in the system. Since tracking is unencrypted we are susceptible to any user tampering by either url editing or POST rewriting. By this i mean that anyone who click on a banner will see a url that looks similar to

and could doctor any of the paramaters.

Another way we lose data is if someone clicks on the banner and after seeing the landing page clicks on anything but donate by cc or paypal. After reading about Wikimedia they decide to click the donate link and pick a payment type. At this point the utm_source would look like '.landing1.pp' notice that it's lacking the first section of our tracking that would typically have the banner name.

During the 2009/10 fundraiser we were able to track 92% of transaction that received an id. 1% had absolutely no data for utm_source while 7% had only '.Support ' which was likely due to fraud.

OWA will be used in conjunction with the above described system.