From Wikitech-static
< Dumps
Jump to navigation Jump to search

Transcription of notes from mid-October 2015.

Some goals of the redesign

No guarantee that we'll adopt all of these but let's keep them in mind.

Those are the basic dump types and we should expect to add others. How do Flow pages get dumped? What about JSON format? Would we be better off generating something like the revisions table in mysql format, prepopulating columns with defaults when we don't have the live values, rather than XML? I'm leaving aside questions of "which compression" for now.

There are a few components for all of these dumps:

Let's look at the case of XML dumps for en wikipedia (a large and so complicated case), and what these four components look like now.

Generation of en wiki dumps is done on a non-standard server with 64GB ram and 4 8-core cpus. The files with content for all revisions are done in parallel by 27 processes. (This could probably be expanded to 31 cores but that's irrelevant to this discussion.)

Each process reads the corresponding stubs file (for example, stubs-meta-history25.xml.gz), and searches for revision content for each revision included in the stubs file, ordered by page. The revisions are first checked for in the revision content dump from the most recent dump, and if not found there they are requested from the db servers.

Because producing just one of these files takes several days, and the run can be interrupted for various reasons (a bad MW deploy, a db server depooled, etc.), we produce them in pieces, closing the current file after 12 hours (configurable) and opening a new file. All filenames contain the first and last page id dumped in the filename. This is all handled in Export.php which is referenced by a MW maintenance script for the dumps.

As the MW php maintenance script for the dumps runs, it writes and errors or warnings generated during the process, as well as progress messages that report the number of pages and revisions processed so far, some speed estimates and an ETA (wrong) of when the job will complete.

These 27 processes are started and watched by a python module designed to run various groups of commands (pipelines, series of pipelines, etc) in parallel, and pass back messages from stdout and stderr on an ongoing basis to a caller-provided callback. In our case the callback function writes the line of output to a status file in the current dump directory and also opdates the index.hmtl file in the dump directory with the message for that dump step.

Once all 27 processes have completed, and if we have good return codes from them all, we do a basic sanity check of the files (checking for the xml mediawiki footer at the end, or for the compression end of file signature for those compression types that support it).

We then generate md5/sha1 hashes for the produced files and update the status of this dump step as completed, via files in the dump directory.

Since older content dumps are needed to run some dump types and steps, we have a server with disk arrays NFS-exported and available to all hosts used for dumps generation. This means that little disk space is used on the generating host. It does mean we have all of the downsides of NFS.

The same server with disk arrays NFS-exported to dump generating hosts also provides service to downloaders and mirror sites, as well as rsyncs to labs.

A monitor process runs on one generating host, checking for lock files produced by each running dump script on the NFS mounted filesystem, cleaning up locks deemed stale (too old), and writing a new index.html file listing all wikis, once per minute.

The dump script running a given dump step updates the index.html page in the dump directory for that date and wiki at regular intervals, typically as it gets progress reports from the php maintenance script that actually produces the output.

The dump script updates files in a directory "latest" containing rss info; it also links to the newly created file, replacing the date in the filename with the string "latest" for the link itself. The monitor, as we said above, updates the main index.html page so anyone checking that will see that a new file is available as well; additionally, the dump run status file (a plain text file easily parseable) is updated so that a client could check the contents of this file periodically.

These days, instead of doing rolling dumps where each wiki's dump is run from beginning to end until it is complete, before going on to the next available wiki, we run them in "stages". This was a special request by folks who wanted the stubs to be generated all at once early in the month, so that statistics could be produced from them and available also early in the month.

The "scheduler" for these stages reads a list of what tasks we want to run (bash script with job names and config file, which indicates the group of wikis to run on). Each command is set to be run a specified number of times, taking some number of cores, and the scheduler knows how many free cores are available at the start of the run (passed as an argument). It's not perfect, as some st stages depend on other stages having run, and by a bit of bad timing we might have fewer dump scripts running a specific stage later on than we would like, as others gave up waiting for their dependencies to show up. But it's been pretty reasonable.

This does mean another layer, however: scheduler - bash scripts - dump scripts - processes running in parallel - scripts running specific page ranges with concatenation of output into a compressor.

In rethinking the dumps, whether XML or other types, there is no reason we need to keep to the current model for generation. For example... we could have an object file store that can handle billions of objects, keeping each page with all its revisions in a single object, for a given wiki. A dump might consist of asking MediaWiki for a list of all pages which have been deleted and removing the corresponding objects; a list of all pages which have been updated, for each of these retrieving and deleting the object, retrieving and appending the new revisions for these pages to the object and storing it again; and a list of all pages with old revisions that have been hidden or otherwise been made unavailable to unprivileged users, and removing those revisions from the pages in a similar way. (This assumes that we do not request a list of page moves; a page move would be considered page creation (for the new location of the page) plus page update (if a redirect is left behind) or page deletion (if not). Finally, after getting and adding a list of new pages to the object store, we could then produce a dump in whatever format we wished, by exporting all the objects to an output formatter. Note that each of these steps should be done in bite-size pieces, any job running for no longer than an hour, so that if it fails we simply rerun it.

For a rethink of the dumps, then we need to look at:

A diagram for discussion with a few walkthroughs 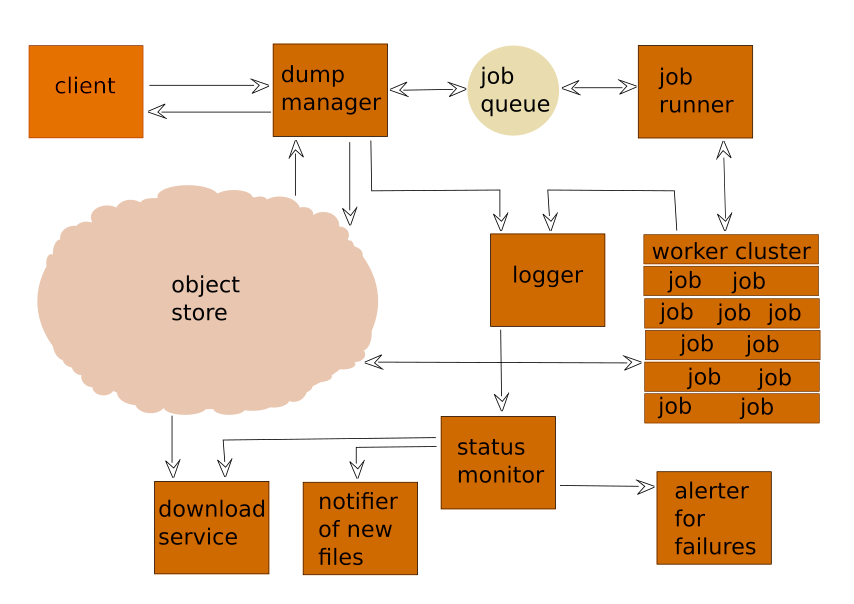 Here's a diagram with the possible building blocks, for discussion; arrows indicate direction of data flow. arrows into a data source indicate writes, out indicate reads.

The client would read dblists and lists of dump steps to run on groups of wikis, in the order we wish them to run. It would generate a list of all dump steps in order on each wiki as appropriate, and pass this list on to the dump manager.

The dump manager would split each dump step into small jobs with limited page ranges and with a one hour time limit option to the job script (php maintenance script). It would add these jobs to the job queue, marking some for running and others as waiting, depending on which jobs need output from previous jobs in order to start.

The jobs themselves, run by the workers, would log to the logging facility as they produce output. Any error messages would be reported there as well. All log entries would include metadata about the job being run: at least, which dump step on which wiki for which date it is a part of. They would write their output files to the object store, and retrieve any files needed for the run (stubs, older page content dumps) from the object store as well.

The dump manager would check the job queue; once jobs for a dump step are completed, it would read them, combine them as appropriate, format them as needed with the desired compression, and write the result back to the object store. It would them remove them from the job queue and log the result. Metadata for each dump step would also be produced at this time and stored in the object store, such as: hash sums, size of uncompressed data, cumulative run time, configuration options for the run (examples only!).

If jobs are marked as permanent failure, the dump manager might requeue after a delay, and after a second round of failures log the failure as permanent, leaving the job in the queue. These jobs would require manual intervention.

The failure alerter might notify via mail and icinga and possibly other means of permanent failures so that humans can investigate the problem.

The new files notifier might produce rss feeds, announce in an irc channel, and perhaps by other means. This would predate the publication to the world by a few minutes, as the download service would not yet have a copy.

The download service would retrieve new files from the object store as it learns they are there, making them available to the world. It would update its index.html files accordingly. It might produce hash files for an entire wiki's dump run from the individual metadata files it will pick up from the object store for each dump step for that wiki and date, etc.

As this whole process is carried out, the client can be used to check via the dump manager what dump steps are running and which are waiting, to shuffle dump steps around or remove them from scheduling, etc. It could also display job status per running or failed dump step, and it could be used to mark any dump step on one or a group of wikis as hold, resume, fix (rerun broken bits), kill, cleanup (remove all output produced from broken run).

This presumes use of existing (with small modifications) php maintenance scripts. Those might be replaced by something very different! But this is an example.