The current architecture does not allow us to scale the write load horizontally:

This leads to 2 problems: 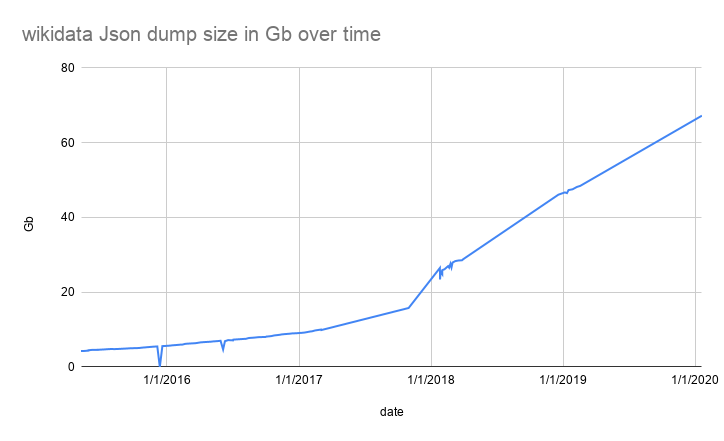 This is the de-facto solution used at the moment; we have no other way to scale today other than increasing the capacity (CPU speed and disk size) of the current hardware. This is obviously not a long-term solution but we have room (compared to mysql master dbs) if the budget allows.

The current hardware is:

For each server (latest order of machines, older machines might slightly less powerful):

There is room for optimization in the current process which might help to reduce the lag.

As of today the current update strategy is to reconcile the triple store using the latest data available from the wikibase Special:EntityData endpoint. This process was designed to be robust to the loss of events as all the entity triples are sent back to the triple store.

Tracked in: task T231411 The purpose of this optimization is to rewrite the “sync update” queries inside the JVM running blazegraph allowing the use of low-level APIs.

Status: on hold, 556188 (put on hold as this strategy tighten the coupling with blazegraph)

Tracked in task T238045 Small optimization where the goal is to parallelize:

The goal here is to optimize the update process to only send the triple store the required triples by doing a diff between two revisions.

For instance if a revision introduces a new site link we should only communicate to the store the triples required to add this site link. This optimization requires re-working the current updater process by decoupling most of its components.

The potential gain is yet unknown but could be approximated by monitoring more aspects of the current Updater (task T239908).

By reducing the throughput of edit events on wikidata we somehow control the lag on WDQS. This makes the maxlag param (a way to inform bots to throttle their edits) dependent on the lag of the WDQS cluster.

Solutions whose goal is to partition the data in a way that a single edit event is sent to a subset of the nodes, not all of them.

Blazegraph does not allow us to do this automatically, although very few triple/graph stores claim to provide such functionality other than the ones based on spark/hdfs or other backends of this kind.

Find a storage solution that can do sharding natively

Most solutions that support real-time updates do not offer graph partitioning.

Sharding does not seem to be a solved problem, even if Dgraph claims to support sharding we should be cautious and understand its limitations.

Find ways/criteria to split the data into multiple distinct groups

These sections involve “product-y” questions that the search team alone may not be able to answer.

Answering these questions depends on the availability of the data in hadoop to run large-scale analysis.

Split direct vs fully reified statements version of the graph

We currently provide the wikidata claims one way using the ‘direct’ namespaces (wdt/wdtn) and another way with full reification.

The truthy (direct) graph is much smaller. By analyzing the query patterns we could determine how often the fully reified graph is required.

TODO: count the number of triples in truthy graph

It should be relatively easy to inspect the query logs.

While this might drastically reduce the size of the graph it is not really solving the problem: all of the “truthy” graph will be stored on a single node. If the truthy graph is not enough, would there be a smaller graph that solves all/most of the use cases?

By analyzing the graph we could try to figure out if there are ways to split entities in multiple buckets that could point to more or less completely separate domains that are rarely queried together.

Analyzing the data and the queries might be helpful but it is unclear if this can actually be done (complexity of the analysis itself) nor if it is useful.

Questions to answer would be: