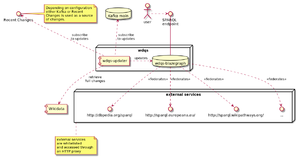 Blazegraph may start burning allocators too rapidly causing the journal to grow too quickly. It might be due: