From Wikitech-static
< WMDE
Jump to navigation Jump to search

Documentation for the WMDE analytics activities.

All of WMDEs puppetized analytics stuff can be found in statistics::wmde and subclasses in the WMF puppet repo.

Currently all scripts run under an 'analytics-wmde' user on the stat boxes. Being in the ‘analytics-wmde-users’ group enables your to have access to the relevant stat box and analytics-wmde user allowing manual triggering of scripts and reading of logs / debugging.

Our dashboards can be found by looking at our 2 main dashboards:

There are also some dashboards not connected to these 2 main dashboards.

We have a scripts repo on gerrit. This repository contains all of the regularly run cron jobs for generating data that is sent to graphite. Most of the code here is currently written in PHP, efficiency isn’t really needed in the code itself as all of the scripts make web requests or db queries. PHP was chosen as it is the main language for WMDE developers.

This repository has 2 branches (generally kept very up to date with each other):

These scripts currently run on stat1007 (dictated by puppet) using systemd timers and run as the user 'analytics-wmde'. Code can be found in /srv/analytics-wmde/graphite/src/scripts. In order to SUDO as this user you will need to be in the analytics-wmde-users LDAP group.

logs by default are only on journald, that keeps them on tmpfs (so basically on ram, they are wiped if we reboot) unless instructed otherwise in puppet (namely the systemd::timer config setting logging etc..)

for the moment journald cannot be accessed by regular users, it needs sudo

This repository contains Java code used to scan the weekly Wikidata JSON dumps and extract information to be fed into graphite for dashboards. A few one off dump processors & other useful things are also kept here.

The build analyzer runs on stat1007 (dictated by puppet) and runs as the user 'analytics-wmde'. Code can be found in /srv/analytics-wmde. In order to SUDO as this user you will need to be in the analytics-wmde-users LDAP group.

The WMDE log channel from MediaWiki will be rsynced across to stat boxes.

The Wikidata Concepts Monitor (WDCM), a system to track and analyze the Wikidata usage across the Wikimedia projects, is documented on this Wikitech page. 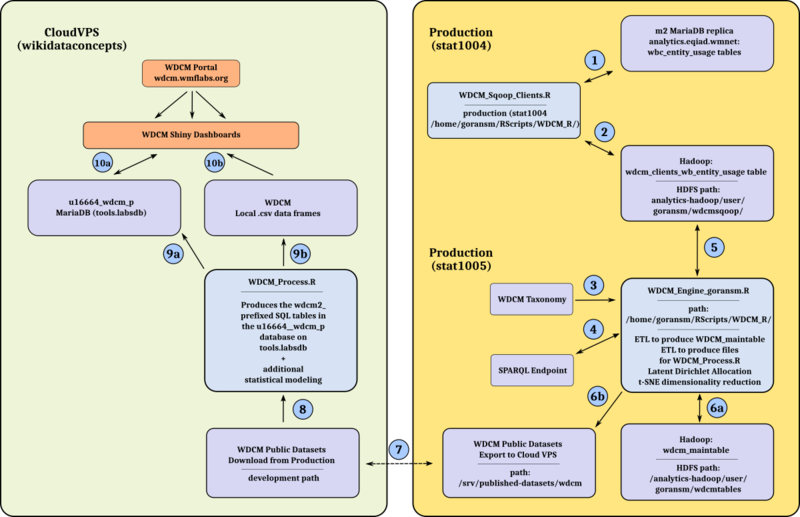