Difference between revisions of "Varnish" 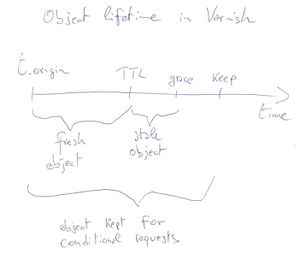 In general, the time-to-life (TTL) of an object is set to the max-age value specified by application servers in the Cache-Control header. A ceiling for max-age is provided by the so called ttl_cap: we clamp max-age values greater than 1 day and set them to 24 hours. If the Cache-Control header is absent, then Vanrish TTL is set to the default_ttl configured in hiera, which is 24 hours as of March 2019. In some cases, we might override all of this by setting beresp.ttl in VCL.

How long is an object kept in cache? It depends on the ttl and two other settings called keep and grace. Just as the ttl, keep and grace can also be set by VCL or default to varnishd's default_keep, and default_grace.

An object is kept in cache for ttl + keep + grace seconds. Whether or not it is returned to clients requesting it depends on when the request comes in. Let t_origin be the moment an object enters the cache, it is considered to be fresh and hence unconditionally served to clients till t_origin + ttl. Grace mode is enabled and the stale object is returned if a fetch for the given object fails due to the origin server being marked as sick and the object is past its ttl but withitn t_origin + ttl + grace. Objects within t_origin + ttl + grace + keep are kept around for conditional requests such as If-Modified-Since.

All of the above applies to a single varnish instance. The object you are fetching has gone through multiple varnishes, from a minimum of 2 layers to a maximum of 4 layers (as of March 2019). Thus, in the worst case the object can be as old as ttl * 4.

Historically, the Wikimedia CDN used a max-age of 31 days (for Varnish, and before that, for Squid). In 2016, an initiative began to reduce operational risk from relying on such a strong cache, and what the actual hitrate distribution is in practice (T124954). In May 2016, the CDN frontend ttl was lowered to 1 day, and in May 2017 the CDN backend ttl was lowered to 1 day.

In case a request from client A results in a cache miss, Varnish fetches the object from an origin server. If multiple requests for the same object arrive before Varnish is done fetching, they are put on a waitinglist instead of being sent to the origin server to avoid pointless origin server load. Once the response is fetched, Varnish decides whether or not it is cacheable. If it is, the response is sent to all clients whose request is on the waitinglist. This feature is called request coalescing.

It is possible to create a special type of object to mark uncacheable responses as such for a certain amount of time. This allows the cache to remember that requests for, say, uri /test will not end up being a cache hit. After an hfp object for /test has been created, concurrent requests for that object will not be coalesced as described previously. Instead, they will all be sent to the origin server in parallel. All requests hitting the object will be turned into pass (hence the name: hit-for-pass).

A hit-for-pass object with 120s ttl can be created in Varnish 5.1 as follows:

Certain objects might not be uncacheable forever. A drawback of hit-for-pass is that no response will be cached for the duration of the ttl chosen for the hit-for-pass object, even if meanwhile the response became cacheable.

Another feature called hit-for-miss is available to make sure that responses becoming cacheable do indeed get cached.

A hit-for-miss object with ttl 120s can be created in Varnish 5.1 as follows:

The decision of which objects to cache at the frontend layer and which are best left for the backend, is crucial to achieving a good hitrate. As of May 2021 we use two cache admission policies: a trivial size-based policy implemented with a static size cutoff, and a probabilistic cache admission policy with probability exponentially decreasing with object size. The static size-based policy is very simple: cache all objects smaller than a static threshold defined in hiera as large_objects_cutoff. The probabilistic policy, also known as the Exp policy, assigns a probability between 0.0 and 1.0 depending on the object size: smaller objects are more likely to be cached, while larger objects are progressively less likely to be cached. This idea implicitly brings popularity into the equation, ensuring that larger, popular objects have a chance to be cached. The policy is enabled and configured by using a few tunable hiera settings:

Different values of the rate and base settings produce different probability curves, and can be visualized using a spreadsheet made by the traffic team for this purpose.

To observe the behavior of the algorithm at runtime, use the following command. In the output below, p is the probability of an object of size s to get cached given the configured base and rate settings. If the random number r is smaller than p, as is the case in the example, then the object will be cached.

As explained below, there are no access logs. However, you can see NCSA style log entries matching a given pattern on all cache hosts using:

The hiera setting profile::cache::varnish::frontend::fe_vcl_config has an attribute called public_clouds_shutdown, defaulting to 'false'. Set it to 'true' to return 429 to all requests from public clouds such EC2.

This rule makes use of the abuse_networks['public_cloud_nets'] netmasks defined in hieradata/common.yaml in the private puppet repo, which has known IP blocks of popular cloud providers. This mask may also be used to write custom ratelimiting/filtering.

The vsthrottle vmod can be used to rate limit certain URLs/IPs. To add some text-specific limit, add a VCL snippet similar to the following to cluster_fe_ratelimit in modules/varnish/templates/text-frontend.inc.vcl.erb:

In case of service abuse, all requests from a given network can be blocked by specifying the source network in the abuse_networks['blocked_nets'] hiera structure in /srv/private/hieradata/common.yaml. Users in the NDA ldap group can access this list on config-master.wikimedia.org

Per above, this file also supports a bot_blocked_nets ACL that will block traffic only from obviously bot-like User-Agents (for example python-requests/x.y.z). This is useful when there is unacceptable bot traffic from an IP range, but real users at that range as well.

Either way: add the network to the right hiera key, commit your changes, and run puppet on all cache nodes with:

If you know whether the IP is hitting text or upload caches, you can use A:cp-text or A:cp-upload respectively for faster recovery. If a host is down, you can lower the success threshold with, e.g. -p 90 .

All requests with source IP in the ACL will get a 403 response suggesting to contact us at noc@wikimedia.org.

Force your requests through a specific Varnish frontend

nginx/varnish-fe server selection at the LVS layer is done by using the consistent hash of client source IPs. This means that there is no easy way to choose a given frontend node. As a workaround, if you have production access you can use ssh tunnels and /etc/hosts. Assuming that the goal is choosing cp2002 for all your requests to upload.wikimedia.org:

Then add a line to /etc/hosts such as

This way, all your requests to upload.wikimedia.org will be served by cp2002.

Sometimes, like when there is the 'mailbox lag' alert on a cp* host, you need to restart the backend and only the backend.

The script for this is:

Run the following commands to upgrade Varnish to a new minor release:

Note that it's important to avoid race conditions with cron-scheduled puppet agent runs. The run-no-puppet command can be used for that purpose.

Upgrading from Varnish 3 to Varnish 4

In the specific case of upgrading from Varnish 3 to Varnish 4, follow this procedure:

Downgrading from Varnish 4 to Varnish 3

Upgrading from Varnish 4 to Varnish 5

Downgrading from Varnish 5 to Varnish 4

There are multiple possible sources of 5xx errors.

Deployment and configuration of Varnish is done using Puppet.

We use a custom varnish 5.1.x package with several local patches applied. Varnish uses a VCL file (Varnish Configuration Language), a DSL where Varnish behavior is controlled using subroutines that are compiled into C and executed during each request. The VCL files are located at

The VCL configuration can be tested using vagrant and the VTC (Varnish Test Case) files shipped with the operations/puppet repo. For example, if the VCL changes that need to be tested have been published as Gerrit change 506868, and they need to be tested against a cache_upload node (cp1076.eqiad.wmnet):

As virtual box is not part in the official debian buster packages one will need to install it from the oracle repos. Further you must use 6.0 as 6.1 is not compatible with the debian package vagrant

Note: if all you need is purging objects based on their URLs, see how to perform One-off purges.

Sometimes it's necessary to do one-off purges to fix operational issues, and these are accomplished with the varnishadm "ban" command. It's best to read up on this thoroughly ahead of time! What a ban effectively does in practice is mark all objects that match the ban conditions, which were in the cache prior to the ban command's execution, as invalid.

Keep in mind that bans are not routine operations! These are expected to be isolated low-rate operations we perform in emergencies or after some kind of screw-up has happened. These are low-level tools which can be very dangerous to our site performance and uptime, and Varnish doesn't deal well in general with a high rate of ban requests. These instructions are mostly for SRE use (with great care). Depending on the cluster and situation, under normal circumstances anywhere from 85 to 98 percent of all our incoming traffic is absorbed by the cache layer, so broad invalidation can greatly multiply applayer request traffic until the caches refill, causing serious outages in the process.

How to execute a ban (on one machine)

The varnishadm ban command is generally going to take the form:

Note that every machine has two cache daemons, the frontend Varnish and the backend ATS. In order to effectively remove an object from both, you must first force the cache miss from ATS, then ban it from Varnish.

Ban all 301 redirect objects in hostnames ending in wikimedia.org

Ban all urls that start with /static/ , regardless of hostname:

Notably, OR is not supported. So something like the following does not work:

Instead, you need multiple bans to get OR semantics:

Execute a ban on a cluster

The following example shows how to ban all objects with Content-Length: 0 and status code 200 in ulsfo cache_upload:

Ban condition for MediaWiki outputs by datestamp of generation

1. Determine the start/end timestamps you need in the same standard format as date -u:

3. Note you can reverse this conversion, which will come in handy below, like this:

4. For ban purposes, we need a regex matching a range of epoch timestamp numbers. It's probably easiest to approximate it and round outwards to a slightly wider range to make the regex simpler. This regex rounds the range above to be 1461241000 - 1461242199 , which if converted back via step 3, shows we've rounded the range outwards to cover 12:16:40 through 12:36:39

5. MediaWiki emits a Backend-Timing header with fields D and t, where t is a microsecond-resolution epoch number (we'll ignore those final 6 digits), like so:

6. To ban on this header using the epoch seconds regex we build in step 4: