Swift is a distributed object store used to hold large media files for many of the wikimedia projects. It was created as part of OpenStack project.

You can read an excellent overview of the Swift architecture on the swift.openstack.org website. This page only talks about what's relevant to our installation.

Proposal and rationale for how much hardware we need for swift in our environment (note - this proposal is based on capacity calculations, not performance. It may need to be adjusted based on performance metrics):

Start serving thumbnails only in eqiad with:

During 2012Q1, expand to serve both thumbs and originals from both colos:

During 2012Q3, expand both clusters as needed for capacity

Current ES hardware comes with 12 2TB disks. The proposed disk layout is 2 disks raid 1 for the OS and 10 disks directly formatted with xfs given to swift (note - the swift docs recommend against using RAID for node storage). This yields 20T of available disk per storage node. Swift stores content in triplicate, so when comparing to current disk utilization, we must divide storage capacity by 3. This means that each additional swift storage node will give us 6.6T usable space. Additionally, 3 nodes is the minimum cluster size allowed, but the docs suggest a minimum of 5 nodes.

Necessary ES nodes for current use and estimated growth:

Here is the list of what components we'll deploy in what order to maximize testability and minimize risk.

All interaction with Swift is done via the proxy (a collection of front end boxes). The proxy handles all communication with the backend object storage machines.

Both originals and thumbnails are stored in the Swift cluster. Thumbnails are more interesting because the 404 handler will create thumbnails that don't exist yet. This section covers what happens when a thumbnail is requested right now, and then each step of the process of moving from where we are now to being entirely backed by swift.

Note This image is how things work right now, before swift gets in the mix. 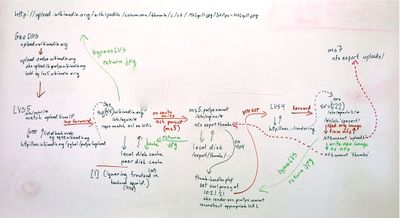 Initially for load testing, but also to provide a gradual shift from the existing system to Swift as a backend for thumbnails, we wish to configure the squids to split traffic between ms5 and swift. By varying the amount of traffic to swift we can evaluate how it handles load. When we're done testing and want swift to handle all the traffic, we can move load back and forth if the system starts to get stressed.

Because the image scalers are writing the created images to NFS, there is no state that gets created on swift that is not also created on ms5, meaning that there will be no data loss if we move off of swift and back to the way it was before. 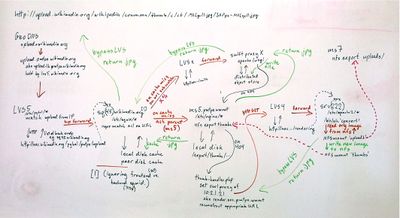 When we are comfortable with swift handling thumbnails, we will move 100% of the traffic out of the squids to swift. Swift will still pass on traffic for images it does not have to ms5. The only change at this step is removing the arrow from the squids to m5s5

At this point we can still roll back (off of swift) without any data loss. 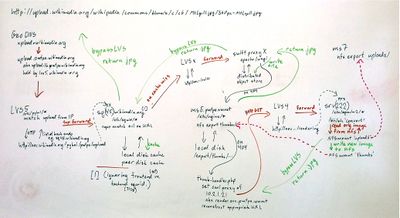 In order to remove ms5 from the picture, we'll have to take the logic that sits in the thumb-handler and move it elsewhere. Most of what this script does is create an appropriate URL then pass it along to the scalers. There are transformations necessary based on the content of the image so that the scalers know which project the image comes from.

This logic will most likely wind up in the 404 handler in swift.

An additional change at this step is that the scalers no longer write the scaled image locally. The only requirement is that they return the scaled image via HTTP; the swift proxy will write it to the data store. At this point the scalers are still using the NFS-based filerepo, not the SwiftMedia extension. They are getting the originals from ms7 via NFS. 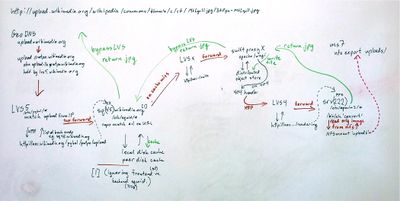 Removing NFS from the scalers

Note This is the desired end state, after all the changes to integrate swift into the thumbnail path are complete.

This step will have to come during the transition of uploading new content to swift (we're just talking about thumbnails here). That path is not yet written, so the details of switching from the current FileRepo (which looks at NFS via a local path) to SwiftMedia (which will talk to swift) as the method of getting the full size image is not yet clear.

Check back after that path is described for details on that switch. 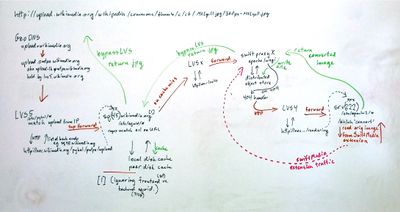 Uploads under swift are relatively simple.

How do we test, deploy, and rollback swift for original uploads?

For all of these deploy ideas, the deploy will have to be in multiple parts

Requests for files go straight to the Swift proxy servers. They don't know about our URL structure, so we have a 'rewrite.py' wsgi module which goes in line with the requests. It recognizes the Wikipedia-formatted requests, and rewrites them into Swift-format requests. It's documented in Extension:SwiftMedia. The Swift proxy server determines which object servers actually have the files. It issues a request to one or more of those servers to fetch the file. It would be quite reasonable to run a caching server in front of the Swift proxy server. The proxy servers also synch between servers, so they might not have extra resources for caching. We will have to see if we want to combine these functions.

how to thumbnails for private vs. public wikis differ?

why don't we use ssl, and what are the ramifications?

These are off on different pages: