SecurePoll is a voting system with per-election configuration stored in the database. We use it for Board elections.

Prior to 2014, there was no UI for creating or editing election configuration. However, there were CLI scripts to import and export the configuration as XML. Elections were created by manually writing XML files and then importing them. That's why cli/dump.php and cli/import.php are relatively complex, and why various old tools produce or act on XML.

A lot of scripts were written under extreme time pressure to do a very specific job per the requirements of a given election. Some were archived under in a year-specific directory under cli/wm-scripts, and then copied forward for each new election with minor modifications. Some scripts were apparently lost.

dumpMetaTranslations.php
SecurePoll has its own translation UI. In the 2013 Board vote this was not used, instead messages were edited as pages on meta. This script generated compiled the translations on meta and generated XML for use with import.php --update-msgs.
doSpam.php
Collects voter names and email addresses, and outputs them as a tab-delimited text file. Used in 2013 and 2015.
buildSpamTranslations.php
Extracts bulk email translations from meta and dumps them as a series of text files.
sendEmails.php
Actually sends emails using files generated by doSpam.php and buildSpamTranslations.php.
dumpGlobalVoterList.php
Similar to doSpam.php, probably used in 2009 and 2011.
populateEditCount.php
This script, copied forward with minor variations from 2013 to 2021, counts local edits selected according to various criteria and stores them in a table on the local wiki: bv2013_edits, bv2015_edits, etc.
voterList.php
The 2013 version was run on each wiki to generate a local voter list. The 2015-2017 version is run once on a random wiki, and populates centralauth.securepoll_lists with a global voter list by adding together edit counts across all wikis.
makeGlobalVoterList.php
A generic version of voterList.php introduced in 2021.
makeArbcomList.php
Supposedly a script of this name was used for the 2009 ArbCom election.

How to run a board election

It is necessary to run scripts to pre-compute eligibility lists. The scripts take about 2 days to run.

The 2021 Board election voter eligibility rule for editors is:

You may vote from any one registered account you own on a Wikimedia wiki. You may only vote once, regardless of how many accounts you own. To qualify, this one account must:

The "not a bot" criterion is the not-bot property, which can be changed in the UI by checking "Must not be flagged as a bot". But note that this only filters by bot permissions on the jump wiki.

The 2021 rules require developers to automatically be granted access if they:

It is unclear how this can be implemented. The wording was introduced in June 2021 and was discussed at phab:T281977.

Exceptions that come from fixed lists, such as staff exceptions, should be put into a flat file containing usernames only, with one name per line. Then on the maintenance server:

where YYYY is the year.

This script can be run multiple times to add different kinds of users.

Creating the election on votewiki 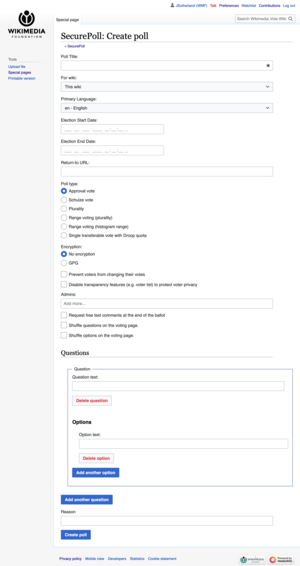 The SecurePoll interface on votewiki is fairly self explanatory, and most of the elements there can be changed at any time before the election. Some of them can also be changed during the election itself (notably, the list of election admins).

Once these options are specified, the election can be created (with a comment for the logs if you'd like to provide one).

Translations are added on a per-election basis through Special:SecurePoll/translate/n (where n is the election id). The following elements are usually translatable in a Board election and will typically have quite a lot of historical translations that can be copied and pasted:

Do a test run

A few days before the election, you should run a test election for a few days, just to make sure that everything (particularly eligibility and the session transfer) is working properly. To make sure that there is absolutely no risk of confusion, change every message in this election to "THIS IS A TEST ELECTION, DO NOT VOTE", or similar.

Create a translatable base page for translations following the format at m:Wikimedia Foundation elections/2021/2021-08-27/Second board voter e-mail, specifically:

Find all global users who have the bot right on at least one wiki, so that they can be excluded from the list:

And similarly for each section s2-s8.

Test the mailout for all translated languages, e.g.

Do the actual mailout:

The script reports the line number from the input file after sending each email, so if you need to restart the script, you can make a new mailing list removing the number of lines corresponding to the last reported line number.

Expect autoreply backscatter of about 100 emails.

You should be prepared to deal with the following types of complaints:

SecurePoll takes the approach of trying to make ballot stuffing detectable, and allowing it to be rectified if it is detected, rather than discouraging it with error messages. This reduces the risk that a malicious user will refine their methods until they are able to evade all technical restrictions. The tradeoff is that it creates a lot of work for election administrators.

(However, allowing the same CentralAuth user to vote twice from different wikis is technical debt arising from the introduction of CentralAuth, it is not a deliberate design decision.)

Duplicate removal is a large task, and as many trusted election administrators as possible should be encouraged to help with it. SecurePoll allows people to alter their votes by voting more than once. But if a person votes more than once with different accounts, or with the same username on different wikis, then those votes are counted twice. Such votes need to be manually removed.

Election documentation should make it clear that each person is only entitled to vote once, and that having multiple qualified accounts is not a license to vote more than once. Policies should be put in place to strongly discourage deliberate ballot-stuffing.

For people who are named as election administrators on vote.wikimedia.org, SecurePoll extends the "list" page to provide a duplicate vote removal interface. As a first pass, sort it by username, and then scroll through the results looking for multiple votes with the same username, ignoring greyed-out entries. Then do the same sorting by IP address.

Votes with a "dup" marker should be investigated. The details page gives the username of the suspected sockpuppet, based on cookie evidence. Any votes deemed to be duplicates should be struck out, by clicking the "strike" link. Voters whose votes are struck should be contacted by email, if they have set an email address in their preferences.

Two separate keys need to be generated for each election: an encryption key and a signing key.

In the past, election committee members have been put under pressure to release running tallies, while voting is still in progress. On one occasion, such a tally was privately given to the interested party, and the results were used to influence voting in a last-ditch campaign. Having an outside party hold the encryption key exclusively until after the election is complete avoids this potential quandary.

Instead, voters wishing to establish the integrity of their encrypted election records should do so by private communication with a private key holder. The election record can be decrypted and compared with who the voter claims they voted for.

The signing key allows voters to prove that they have a valid encrypted record. If a voter has a signed voting record which is not present in the database, then this is clear evidence that the server has been compromised.

To generate each key:

Key generation should be done by the 3rd party keeping the decryption key.

Tallying can be done with the UI, however this puts the encryption key in the database. Tallying with cli/tally.php does not have this problem, and is more reliable.

SecurePoll supports having an election stubbed out on the wiki that the voters actually come from, but hosted somewhere else (votewiki in this case).

Since 2014 these stub elections are created automatically by the election creation UI when you select the "all wikis" option.

Prior to 2014, the stub elections were set up by generating an XML configuration file and importing it into all wikis.

Users do not actually need an account on the wiki where the vote is actually hosted. This was used prior to 2013 to host the vote on servers not controlled by WMF. Even though we now self-host our elections, votewiki does not have CentralAuth enabled and so users will typically not have a user account when they vote.

Session transfer works by having the jump wiki send a token to votewiki. Votewiki authenticates the token by doing an HTTP request to auth-api.php. The auth-api.php request returns user parameters which are saved by votewiki. This mechanism predates the action API and there is a task to convert this mechanism to finally use the action API which may soon be implemented.

A config hack adds "lang" and "site" parameters to the jump URL, which the remote site uses to reconstruct a URL back to the jump wiki.

2004
The first Board election. Tim, then a volunteer, quickly wrote the BoardVote extension to run this election. It was one of the first MediaWiki extensions. Many of SecurePoll's quirks were already present, such as GPG-based encrypted vote receipts. The voting/tallying method was approval voting.
2005-2008
The BoardVote extension was edited for each election, changing table names etc. to make it continue to work for another year.
2007
The first election hosted by Software in the Public Interest (SPI). SPI would host the 2007, 2008, 2009 and 2011 elections.
2008
The tallying method was changed to the Schulze method (a Condorcet preferential method).
2009
Tim wrote the first version of SecurePoll, as a multi-election adaption of the BoardVote code. It was used for the 2009 Board election.
2013
Elections returned to being self-hosted. Encryption of voting records at rest effectively ended, with private (tallying) keys being stored on the server instead of held by an election administrator and tallied offline.
2013
The voting method was changed to a modified range vote formula: support/(support+oppose).
2014
Brad wrote an election creation UI. But the UI continues to be incomplete and was not used for voter qualification in 2015-2021.
2021
The voting method was changed to Single Transferable Vote.