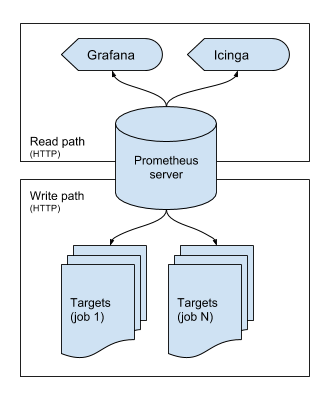 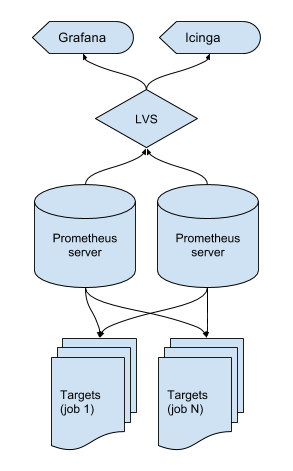 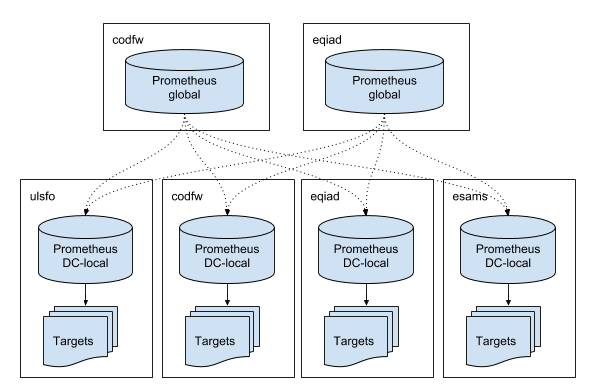 The global instance is what we would normally use in grafana as the "datasource" for dashboards to get an overview of all sites and aggregated metrics. To drilldown further and get more details it is possible to use the datacenter-local datasource and dashboard.

In the diagram above the various Prometheus servers are logically separated, though physically they can share one/multiple machines. As of Nov 2016 Prometheus dc-local runs in two VMs for each of eqiad/codfw (instance named "ops") and we're in process of provisioning real hardware.

An open question at this time is where to host the dc-local Prometheus servers for caching centers, essentially two options:

The local option offers some advantages since all sites are logically the same and all polling for monitoring purposes is kept local to the site. Only the global instance would reach out to remote sites and thus could be affected by cross-DC network unavailability.

This is significant especially during outages: the global instance would show a drop in global aggregates while the dc-local instance can keep collecting high-resolution data from site-local machines.

One disadvantage of the local option is (as of Nov 2016) running Prometheus on the bastion for sites where we lack internal dedicated machines (e.g. ulsfo) alongside other services like tftp/installserver.

The most benefits from service metrics are obtained when services are directly instrumented with one of Prometheus clients, e.g. Python client. Metrics are then exposed via HTTP, commonly at /metrics, on the service's HTTP port (in the common case) or a separate port if the service isn't HTTP to begin with.

For cases where services can't be directly instrumented (aka whitebox monitoring), a sidekick application exporter can be run alongside the service that will query the service using whatever mechanism and expose prometheus metrics via the client. This is the case for example for varnish_exporter parsing varnishstat -j or apache_exporter parsing apache's mod_status page.

Another class of metrics is all those related to the machine itself rather than a particular service. Those involve calling a subprocess and parsing the result, often in a cronjob. In these cases the simplest thing to do is drop plaintext files on the machine's filesystem for node-exporter to pick up and expose the metrics on HTTP. This mechanism is named textfile and for example the python client has support for it, e.g. sample textfile collector usage. This is most likely the mechanism we could use to replace most of the custom collectors we have for Diamond.

Yet another case involves service-level ephemeral jobs that are not quite long-lived enough to be queried via HTTP. For those jobs there's a push mechanism to be used: metrics are pushed to Prometheus' pushgateway via HTTP and subsequently scraped by Prometheus from the gateway itself. This method appears similar to what statsd for its semplicity but it should be used with care, see also best practices on when to use the pushgateway. Good use cases could be MW's maintenance jobs: tracking how long the job took and when it last succeeded; if the job isn't tied to a machine in particular it is usually a good candidate.

Cassandra is hosted on separate Graphite machines due to the number and size of metrics it pushes, particularly in conjunction with Restbase. It should be evaluated separatedly too if e.g. a separate prometheus instance makes sense. WRT implementation there are two viable options: