Cloud VPS is a virtualization cloud that uses OpenStack Compute. Base images are managed with Glance and authentication uses LDAP-backed Keystone.

Cloud VPS currently runs in a single datacenter in Ashburn, Virginia. In the future it will span two or more datacenters, with a slightly different configuration in each. 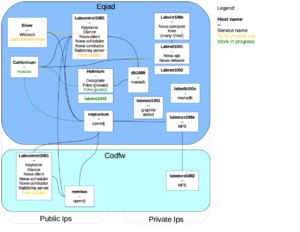 The servers that make Wikimedia Labs

In addition to hosting the WMF's technical documentation, the wikitech web site also runs the OpenStackManager MediaWiki extension that provides a graphical interface for labs. Wikitech runs on a server internally named Silver.

An alternative, partially-functional labs GUI can be accessed at https://horizon.wikimedia.org/. It runs the openstack-dashboard project and provides nova API access to project admins.

The labs controller box (currently named 'labcontrol1001') runs the Glance and Keystone services, as well as a few nova services (conductor and scheduler.) Labcontrol1001 also runs a public DNS server (aka labs-ns0) which provides name services for the .wmflabs.org domain.

Another duplicate server, labcontrol2001, runs in codfw and contains a duplicate config. It is largely vestigial, but does provide backup DNS service via the labs-ns1 service name.

The network node ('labnet1001') hosts the nova-network service. We currently run a single labs-wide network that supports all lab nodes and projects. In the future we hope to use Openstack Neutron for our network setup, but it doesn't support our use-case; to use neutron we'll need to switch to one network per project.

Soon an additional server, labnet1002, will provide either redundant network service or as a hot spare. To be determined. 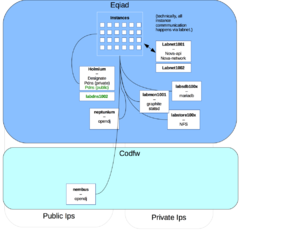 The servers that a labs instance talks to

There are currently thirteen virtualization nodes in labs, named labvirt1001-1013, all running in eqiad:

All of the above are hosted on an NFS server named labstore1001. There's a hot-swappable backup, labstore1002, which is generally turned off.

Labmon1001 runs statsd and graphite. It monitors the state of labs instances and collects stats and sends alerts as needed.

The LDAP server software is opendj. Each labs instance has an /etc/ldap.conf file (managed by puppet) that maintains info about the ldap servers. 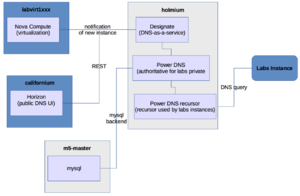