This page explains how the CloudVPS network works, including the neutron Openstack component.

For the sake of explanation, this document uses the eqiad1 deployment as example, but may be others with same mechanisms.

There are 2 different kind of network involved:

There are 3 routers involved:

There as been some research on whether we should collapse the 2 interfaces in one, aiming to reduce usage on 10G ports on the switches. The initial research showed promising results, but we didn't introduce this change yet.

TODO. Inside the virtual realm.

In the case of the eqiad1 deployment, the relevant elements are:

In the case of the codfw1dev deployment, the relevant elements are:

Some notes on the ingress & egress particularities.

By default, all the traffic from VMs to the Internet (egress) is source NATed using a single IPv4 address. This address is called routing_source_ip.

There are 2 cases in which this egress NAT is not applied:

The dmz_cidr mechanisms allows us to define certain IP ranges to which VMs can talk to directly without NAT being involved.

A typical configuration per deployment looks like (please refer to ops/puppet.git for actual hiera values):

Please note that the dmz_cidr mechanism takes precedence over the routing_source_ip configuration.

A static route is required on the routers so return traffic knows what path to take to reach the Cloud Private IPs.

This mechanisms allows us to create an additional public IPv4 address in Neutron. Then this new IP address will be associated with a given instance and all of his egress/ingress traffic will use it (both SNAT and DNAT).

A quota needs to be previously assigned to a project due to limited resources.

Please note that the dmz_cidr mechanism overrides floating IP NAT configurations, and you can see non-NATed packets arriving at VMs with a floating IP assigned.

Here is an example of 3 software defined floating IPs created by Neutron in the codfw1dev deployment, not using eqiad1 for brevity, but it works exactly the same:

traffic from instance to own floating IP

VM instances may try having traffic to its own floating IP. As described in T217681#5035533 - Cloud VPS instance with floating (public) IP can not ping that IP directly, this is not possible with default configuration.
That packet arriving the VM instance would be a martian packet.

A workaround of this is to instruct the network stack to allow this kind of martian packet:

Some important IP addresses in the eqiad1 deployment:

Some important IP addresses in the codfw1dev deployment:

What Neutron is doing

This section tries to give some light on how Neutron is implementing our network topology under the hood, and what is doing with all this configuration.

When a virtual router is created, and assigned to an l3-agent, a linux network namespace (netns for short) will be created: 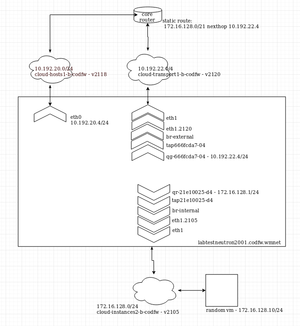 This netns will hold all the configuration: IP addresses (such as gateways, floating IPs), iptables rules (NAT, filtering, etc), and other information (static routes, etc).
Using virtual taps, this automatically-generated netns is connected to the main netns where the physical NICs live, along with bridges and vlan tagged subinterfaces.

All this is done in the eth1 interface, while eth0 is left for connection of the cloudnet box to the provider network.

When a virtual router is created, Neutron will decide in which l3-agent will be deploying it, taking into account HA parameters.
In our active-standby setup, only one l3-agent is active at a time, which means that all this netns/interfaces/iptables configuration is deployed by Neutron to just one node.

The 'q-' prefix in netns is from earlier development stages, Neutron was called Quantum.