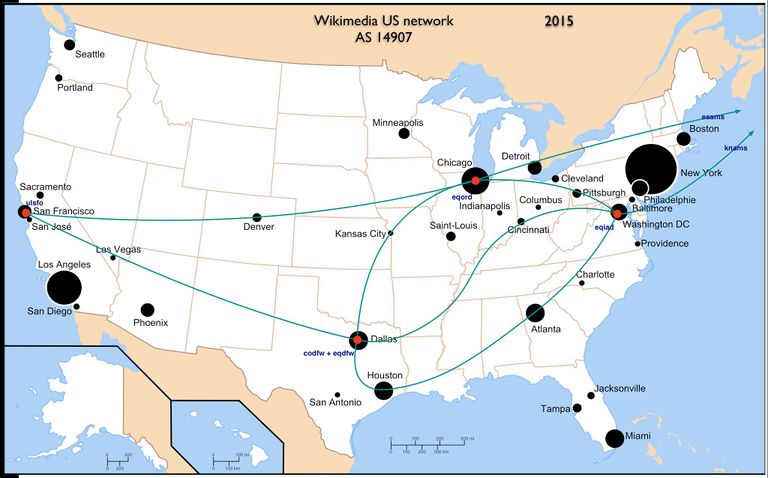 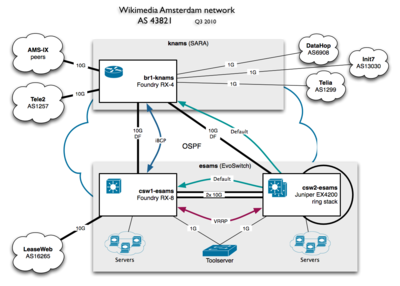 The purchase of several Juniper EX4200s in a stack, for extra access ports for servers, also brings some opportunities w.r.t. the network topology. Since the EX4200s have excellent L3 support they can help create redundancy.

The 2nd dark fiber is linked between br1-knams and csw2-esams to create a ring. csw1-esams and csw2-esams can then share responsibility as core switches, for inter-vlan routing and switching, using VRRP. Since an EX4200 can not install a full BGP routing table in FIB, it defaults to either of the two Foundry routers using OSPF.

Toolserver can be connected redundantly as well, using (R)STP to both core switches and VRRP, or alternatively a LAG to the EX4200 stack. 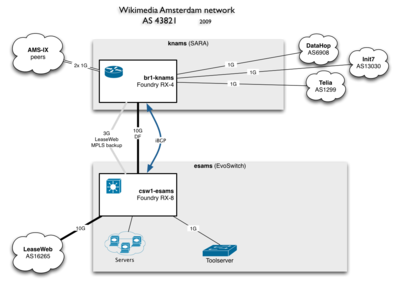 Temporary situation after the move from knams to esams. The network is split, with a new Foundry BigIron RX-4 as a pure router at knams for external connectivity, with Telia, DataHop, Init7 (partial) transit, and 2x 1 Gbps AMS-IX for peering. Connectivity between the two sites is supplied by a 10GBase-ER link over dark fiber, and a 3 Gbps MPLS backup link. A second dark fiber is being installed to form a ring. 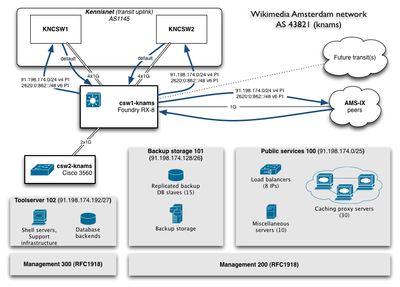 BGP default transit from AS1145 (Kennisnet), with some partial transit and peering over a 1 Gbps AMS-IX link. Everything on one core router/switch, csw1-knams (Foundry BigIron RX-8).