Memcached for MediaWiki: Difference between revisions

This page is about Memcached for MediaWiki.

This page is not about other Memcached clusters in production, such as those for Thumbor, Wikimedia Cloud Services, Wikitech wiki, and Swift. 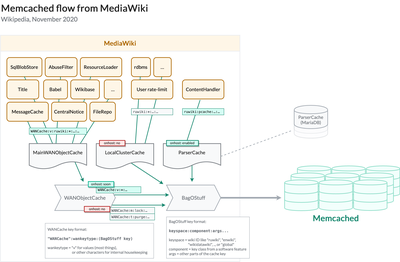 There are two logical pools of memcached servers for MediaWiki:

MediaWiki connects to memcached through a proxy called mcrouter, which provides a number of benefits such as such as connection pooling, consistent sharding, and failover functionality. See #Mcrouter for how these proxies are used.

WANObjectCache is the abstraction layer in MediaWiki PHP that deals with multi-datacenter concerns and mcrouter. It builds on top of BagOStuff which is the generic key-value class that abstracts the memcached protocol itself.

If you're trying to track down the specific revision text given an SqlBlobStore key, the somewhat convoluted procedure is documented at mw:Manual:Caching#Revision_text.

There is a local mcrouter instance on every app server.

There is also a cluster of 4-shard "Proxies" pool of mcrouter instances in each data center for the purpose of receiving cross-dc memcached commands to then proxy further to the dc-local app servers accordingly.

TODO: Do these proxies also consider their dc-local gutterpool?

Each MediaWiki api/appserver sees memcached through a local proxy called Mcrouter[1]. Mcrouter introduces the concepts of routes and pools and each route applies consistent hashing on the key name to know where to send it, i.e. which of the 18 shards for memcached.

There are several routes available in our configuration, which are addressable via a route prefix that mcrouter strips from the key before forwarding the memcached command.

The memcached key WANCache:v:metawiki:translate-groups (belongs to the Translate extension) is formatted by the WANObjectCache library. When Translate wants to get the value of this key, WANObjectCache will send a GET command from MediaWiki to localhost:11213, where mcrouter is listening. The command is then further routed to mc1022 (based on key hashing). MediaWiki it totally ignorant about the mc[1,2]0XX host, it only knows about sending commands to a localhost port. A mcrouter admin command helps figure out where keys are hashed/routed to:

Some things to notice:

To get a key and dump it to a file it is sufficient to:

In this case the key's value is pretty big, and it needs PHP to be interpreted correctly (to unserialize it), but nonetheless we got some useful information (like the size of the key). This could be useful when it is necessary to quickly get how big a key is, rather than knowing its content.