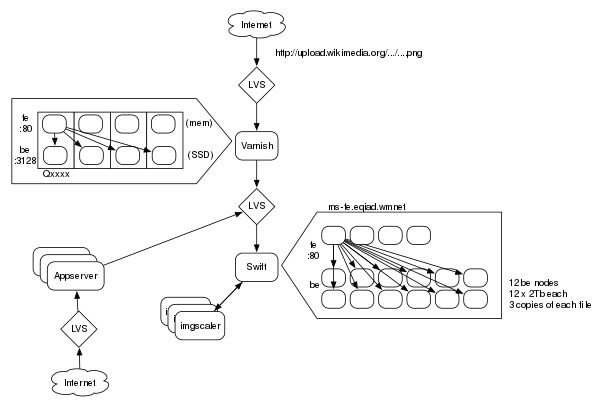 When a user requests a page from a public wiki, links to scaled media needed for the page (e.g. http://upload.wikimedia.org/project/language/thumb/x/xy/filename.ext/NNNpx-filename.ext) are generated, but the scaled media themselves are not generated at that time. As the thumb sizes are arbitrary, it is not possible to pregenerate them either, therefore the only way to handle this is to generate them on demand and cache them. On the MediaWiki side, this is accomplished by using the configuration settings: 'transformVia404' => true for the local file repo, $wgGenerateThumbnailOnParse = false, $wgThumbnailScriptPath = false.

The architecture here is very different between Swift and Ceph (so far, there are plans to converge):

For private wikis this can't be the case as no access control happens outside the MediaWiki layer. Therefore, the links there are not to upload.wikimedia.org but to /w/thumb.php?f=Example.png&width=450 on the wiki itself, with MediaWiki ultimately serving the file.