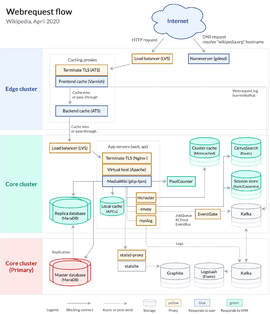 There are broadly speaking four kinds of static assets served by Apache on MediaWiki application servers:

This offers the strongest performance (client-side immutable, and server-side wiki-agnostic shared cache), whilst also operating under relatively tight requirements (must know the exact version at the point where the file is requested). This is especially difficult in the face of ParserCache and our CDN, given that you'd generally want to present users with a consistent experience from page-to-page where an icon or other visual aspect does not alternate based on when the page was last modified. The way we generally make this work is by linking to assets through one level of indirection, e.g. through a stylesheet or JavaScript module (see also: mw:ResourceLoader/Architecture#Caching).

Example use cases where we can't reasonably use a verison hash and thus generically serve the current version: