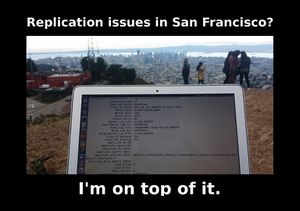 DBAs are working on it

This guide is a work in progress. See also MariaDB/monitoring and MariaDB/Backups#Recovering_a_Snapshot

Create a task with the DBA tag so DBAs can follow up and checkout what happened, a proper fix etc

(no wikiuser or wikiadmin processes, ok to do maintenance, kill the machine, etc.)

If the failed replica is part of x2, there is no need to depool it as they aren't used.

Master comes back in read only

A master coming back in READ ONLY mode is expected after a crash and it is done to prevent accidental corruption (or even more corruption on a crash).

Unless you know what you are doing, do not set it back to writable: if unsure, call a DBA

Reads will remain unaffected but no writes will be able to go through, the wikis on that master will be on read-only mode.

To find out which wikis are those:

If unsure, call a DBA

If you know what you are doing:

If this is part of a maintenance and pages it could be due to expired downtime or because it was forgotten to be downtimed. If that is the case, contact whoever is doing the maintenance, if it is you, remember to:

Depooling a master (a.k.a. promoting a new replica to master)

See an example task and checklist at: https://phabricator.wikimedia.org/T313383

From the operations/software/ repo, run the following script to get a proper checklist of all the steps needed:

Note: It's better to just call a DBA.

If the master is not available, or replication is broken, this is a more complex case. The reason is that replicas will have executed different amount of transactions and will be in a close, but different state. E.g. slave1 has executed transactions A, while slave2 has executed transactions A, B and C. In addition to that, if we do not have access to the master's binary log (or it has not properly been synchronized to disk after a crash), we will have to recover from a replica. In theory, with semi-sync replication, no transaction will be lost, and at least one replica will have the change, but all other replicas will be on different coordinates (and binary log position is only local to the masters).

Scenario 1 -master is recoverable: just wait until the master restarts, it will avoid headaches and be faster and less disruptive than trying to failover it.

Scenario 2 -master is not recoverable, but its binary log is (and all replicas have a less or equal amount of data):

Scenario 3 -neither master is recoverable nor its binary logs (or a master binary log is behind a replica binary log): We need to put all servers in the same state, using the most up-to-date replica, then perform the regular failover process. This is the most complicated part without using GTIDs:

Again, these steps can be automated.

This is what a half-failing disk looks like in monitoring (small lag until it becomes critical).

One common cause of lag that is easy to check and repair is hardware issues.

Disks about to fail

Databases have a lot (and I mean a lot) of IO pressure, and while it is not insane, it means that 3-year old drives are very prone to fail.

As an operator, you are already familiar with the way drives fail (not very reliably, to be honest). All important databases have a hardware RAID, which means 1 disk can fail at a time, usually with very little impact. When that happens, the icinga alert "1 failed LD(s) (Degraded)" should tell you it is time to replace at least one disk. Usually there are spares onsite or the servers are under warranty, which means you can create a ticket to ops-eqiad or ops-codfw and let Chris or Papaul know that should take it off and insert a new one, the hw RAID should automatically reconstruct itself.

To check the RAID status, execute:

And check the section "Devices present"

To identify the particular disk

Check in particular for the Firmware State (on or off), the S.M.A.R.T alerts, and the number of medium errors (a few, like a dozen, should not affect much performance, but when there are hundreds of errors in a short timespan, that is an issue).

Sadly, disks fail in a very creative way, and while our RAIDs controllers are reliable enough to 1) continue despite medium errors and 2) disable the disk when it fails completely; in a state of "almost failing", there could be lag issues. If that is the case, executing:

where #:# is enclosure:slot, will take the particular physical drive offline so that it can be replaced later.

If all the disks are looking good, it can be that the RAID controller went to WriteThrough mode because of a failed BBU or because it is in a learning cycle (which shouldn't because it is disabled in our environment). If the Cache Policy is set to WriteThrough it will dramatically affect performance. In order to check the Current Policy (that is it, the active one):

If it is not in WriteBack mode, it means (most likely) that the BBU has failed for some reason and the default is to switch back to WriteThrough as it is safer. You can check the BBU status with:

If you are in an emergency, you can always force WriteBack, but this can lead to data loss if there is a power failure, so use it carefully

Overload due to long running queries

If a host or several of them are complaining due to max_connection limit as seen by the processlist and max_connection errors on the mysql graphs [1] [2] or on application server logs (sometimes causing also "Not enough idle PHP-FPM workers for Mediawiki" as a cascade error), it is possible that one or several queries run by mysql are taking over all mysql resources, snowballing into blocking others for execution. While mysql server will likely stay up, as they use a queue to avoid executing many of them at the same time, the queing will increase extra latency on execution, affecting application servers resources, too.

This can be caused by a deliberate abuse of expensive functionality or API call, by a bug on application code sending poorly-optimized queries, or a change on the query planner that makes old fast queries now slower.

To fix the issue, the best way is disabling on mediawiki the functionality that is sending the long running queries.

MariaDB mediawiki instances have a query killer enabled that kicks in when it detects idle queries or queries executing for longer than 60 seconds (agreed as the maximum query time allowed by web requests). If a connection overload is detected (by monitoring current connections), an overload killer also kicks in.

For a faster recovery, or to gain time until a longer term fix is deployed, roots can use the db-kill script from cumin hosts for the affected databases, to kill long running queries. Please note that this can alleviate the symptoms, but won't fix the root cause.

You can also login to the database and do `show processlist`. Find the long-running queries and run `kill QUERY ID` (replace QUERY ID with the id given in show processlist).

There is an alert "MariaDB memory", that checks that there is not memory over-commitment due to a missconfiguration, heavy activity or a leak. For now the alert is just a check that there is enough free memory (not counting filesystem cache) for client connections, utilities and background tasks. If a host starts alerting (or starts OOMing), reduce the buffer pool or load to go back to the 80-90% memory usage.

While MariaDB can reduce the buffer pool in a hot way, just by typing SET GLOBAL innodb_buffer_pool_size = <new size in bytes>;, I don't recommend doing that on a pooled database because it will create stalls/replication lag while the buffer pool is being resized. It is not dangerous, but it is a heavy operation to try to avoid while pooled.

The best (and fastest) way to repair a replica (or a master) is to use the regular provisioning workflow - to copy the latest snapshot from dbprovXXXX hosts. Depending on the section it should take minutes to 1h.

If only a partial recovery is needed (single dropped table), logical backups (on the same dbprov* hosts) may be faster and more flexible. A full logical recovery can take from 12 hours to 1 day.

If for some reason the short term backups/provisioning files are not enough, you can get those from bacula. Recover from bacula to dbprovXXXX then use the same method as above.

If for some reason no backups are available, but replicas are, we can clone a running mariadb server with xtrabackup or the files of a stopped one into another host (see transfer.py utility for both file and xtrabackup transfers).

Binlogs are not a backup method, but they are files containing the transactions in the last month, on every master and replica. They are helpful to do point in time recovery if replication is not working, allowing to move forward a backup until an arbitrary point in time (e.g. before a DROP was sent).

Point in time recovery at the moment is fully manual but its automation is a work in progress.

compare.py utility allows to manually check the difference between 2 hosts. This is right now manually run, but it is schedule to be constantly running comparing host inconsistencies.

Aside from a manual check, the other most common way to find inconsistencies is for replication to break as a change is applied to a master that cannot be applied to the replica.

NEVER use sql_slave_skip_counter! Not only you will skip full transactions (despite maybe a single row being problematic, creating more drift issues), you will make hosts have a different gtid counter. If you have to manually change something on only 1 host, apply the dml with set sql_log_bin=0 so it doesn't go to the binlog/gtid counter/replication.

There is an additional case, which is if a "split brain" has happened and correct data was written to both master and replicas.

This is rare given that all replicas are set in read only to prevent this issue. Also this is difficult to handle- ideally data should be merged into a single unified version.

If data affected is derived (non-canonical) ", eg. *links tables, you could temporarily chose a single set of servers, go back to read/write and the try to merge the difference in the background.

If canonical data is affected (page, revision, user), consider setting up the application/section in read only until data is reconciliated, so new versions are not added that could make the 2 data version merging more complicated.