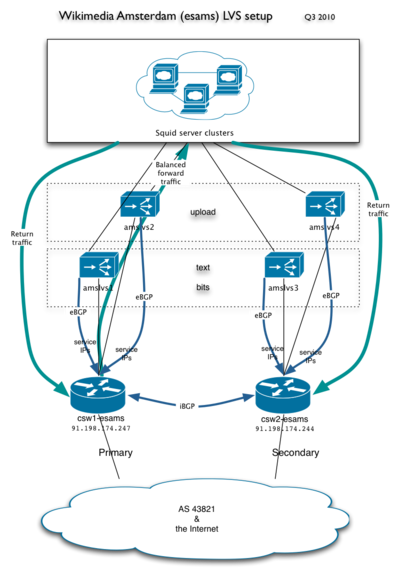 We use LVS-DR, or Direct Routing. This means that only forward (incoming) traffic is balanced by the load balancer, and return traffic does not even go through the load balancer. Essentially, the LVS balancer receives traffic for a given service IP and port, selects one out of multiple "real servers", and then forwards the packet to that real server with only a modified destination MAC address. The destination servers also listen to and accept traffic for the service IP, but don't advertise it over ARP. Return traffic is simply sent directly to the gateway/router.

The LVS balancer and the real servers need to be in the same subnet for this to work.

The real servers are monitored by a Python program called Pybal. It does certain kinds of health checks to determine which servers can be used, and pools and depools them accordingly. You can follow what Pybal is doing in log file /var/log/pybal.log.

PyBal also has an integrated BGP module that Mark has written (Twisted BGP, available in the MediaWiki SVN repository). This is used as a failover/high availability protocol between the LVS balancers (PyBal) and the routers. PyBal announces the LVS service IPs to the router(s) to indicate that it is alive and can serve traffic. This also removes the need to manually configure the service IPs on the active balancers. All LVS servers are now using this setup.

Edit the files in /srv/pybal-config/$colo on config-master.$colo and wait a minute - PyBal will fetch the file over HTTP. Please don't forget to commit your changes locally.

If you set a host do disabled, PyBal will continue to monitor it but just not pool it:

If you comment the line, PyBal will forget about it completely.

In emergency cases, you can do this manually using ipvsadm, if PyBal for some reason is not working for example.

Note that PyBal won't know about this, so make sure you bring the situation back in sync.

Example request for checking the current status for restbase in eqiad via http:

See which LVS balancer is active for a given service

If you have ssh access to the host in question, sshing to the IP address will land you in a shell on whichever system is active.

If you don't want to connect (or can't connect) to the system, ask the directly attached routers. You can request the route for a given service IP. E.g. on Foundry:

To see all LVS servers configured for a service

To see which servers are configured for a service, but not which server is currently active, look in the puppet configs.

example showing that lvs3 and 4 are responsible for swift (command output excerpted for clarity):

Deploy a change to an existing service

LVS now uses Puppet and automatic BGP failover. Puppet arranges the service IP configuration, and installation of packages. To configure the service IPs that an LVS balancer should serve (both primary and backup!), set the $lvs_balancer_ips variable:

In this setup, all 4 hosts amslvs1-amslvs4 are configured to accept all service IPs, although in practice every service IP is only ever serviced by one out of two hosts due to the router configuration.

Puppet uses the (now misleadingly named) wikimedia-lvs-realserver package to bind these IPs to the loopback (!) interface. This is to make sure that a server answers on these IPs, but does not announce them via ARP - we'll use BGP for that.

In file lvs.pp the services themselves are configured, from which the PyBal configuration file /etc/pybal/pybal.conf is generated by Puppet.

Most configuration is in a large associative hash, $lvs_services. Each key in this hash is the name of one LVS service, and points to hash of PyBal configuration variables:

description
Textual description of the LVS service.
class
The class the LVS service belongs too; i.e. on which LVS balancers it is active (see below).
ip
A hash of service IP address for the service. All IP addresses are aliases, and are translated to separate LVS services in PyBal.conf, but with identical configuration.

The other configuration variables are described in the PyBal article.

Global PyBal configuration options can be specified in the $pybal hash.

To determine which LVS services are active on which hosts, the $lvs_class_hosts determines for each class, which hosts should have the services for that class. This is used by the pybal.conf template to generate the LVS services. The following classes are used, to distribute traffic over the LVS balancer hosts:

Previously, the LVS balancer that had a certain service IP bound to its eth0 interface was active for that IP. To do failovers, the IP had to be moved manually.

In the new setup, multiple servers announce the service IP(s) via BGP to the router(s), which then pick which server(s) to use based on BGP routing policy.

Enables bgp globally, but can be overridden per service.

The ASN to use while communicating to the routers. All prefixes will get this ASN as AS path.

The IP of the router this PyBal instance speaks BGP to.

An optional modified AS path. Can be used e.g. to make the AS path longer and thus less attractive (on a backup balancer).

The LVS_import policy adds metric 10 to the "routes" (service IPs) received from the secondary (backup) LVS balancers. This means that the router will regard them as less preferred.

The individual /32 and /128 service IPs are announced by PyBal and exchanged between the routers using IBGP. Aggregates for the service IP ranges are generated by the core routers and redistributed into OSPF as well.

As the Apache cluster is often suffering from broken disks which break SSH but keep Apache up, I have implemented a RunCommand monitor in PyBal which can periodically run an arbitrary command, and check the server's health by the return code. If the command does not return within a certain timeout, the server is marked down as well.

The RunCommand configuration is in /etc/pybal/pybal.conf:

runcommand.command
The path to the command which is being run. Since we are using a shell script and PyBal does not invoke a shell by itself, we have to do that explicitly.
runcommand.arguments
A (Python) list of command arguments. This list can refer to the monitor's server object, as shown here.
runcommand.interval
How often to run the check (seconds).
runcommand.timeout
The command timeout; after this amount of seconds the entire process group of the command will be KILLed, and the server is marked down.

The limited ssh accounts on the application servers are managed by the wikimedia-task-appserver package.

Nagios monitoring of LVS services is managed by Puppet as well, at the bottom of the lvs.pp file. For example:

Run ipvsadm -l on the director. Healthy output looks like this:

All the servers are getting a decent amount of traffic, there's just normal variation.

If a realserver is refusing connections or doesn't have the VIP configured, it will look like this:

Active connections for the problem server are depressed, inactive connections normal or above normal. This problem must be fixed immediately, because in wlc mode, LVS load balances based on the ActiveConn column, meaning that servers that are down get all the traffic.

Don't ever bind IP addresses directly to lo in /etc/network/interfaces. If you do, stuff breaks. (This applies not just to LVS servers but any real server as well. Anything with the wikimedia-lvs-realserver package will break if you bind addresses manually.)

When it's broken, it looks like this. Notice that all the balanced IP addresses are tagged lo:LVS except 10.2.1.13. 13 is broken and causes the ifup script that reloads the IPs to be broken.

The solution here is to delete the broken interface (ip addr del 10.2.1.13/32 dev lo), then run dpkg-reconfigure wikimedia-lvs-realserver. This triggers the scripts that will re-add all the IP addresses.