An external client issued a really large number of requests for what appears to be nonexistent original images uploaded to commons that caused the thumbor service to return 503s and eventually paged.

Impact: Approximately 291,000 thumb-nailing/resizing for images (which is what the thumbor service is for) requests failed and were returned as 503s (an HTTP error code). 76,000 of those from the offending IP. The incident affected eqiad and esams, so predominantly Europe and East Coast of the American Continents.

We were paged by icinga, roughly 40 mins after the behavior started.

Screenshots of the above dashboards are below as well: 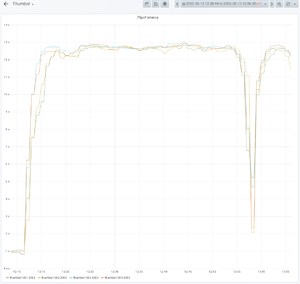 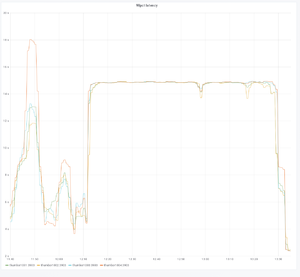 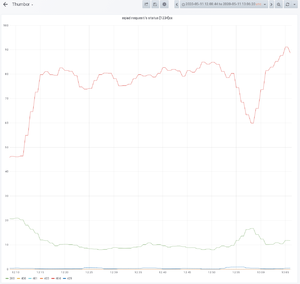 We were paged by icinga, roughly 40 mins after the behavior started. The alert was the LVS one, about the entirety of the service. No alerts prior to that, despite the event having started 30+ minutes earlier.

The current per-IP throttling implemented in Thumbor is inadequate. It attempts to create a system where a given IP can only use X workers and have a queue of Y, but since it's based on PoolCounters requests beyond the X limit are actually served by other Thumbor workers. We end up with a situation where the client can keep a lot of workers busy… waiting on its own throttling lock. This wasn't the intention and as such the PoolCounter-based throttle is broken.

We were quickly able to identify the cause of the incident and react to it. Automated monitoring detected the incident, albeit relatively late.

Thumbor as a service was under stress for ~40m before it paged. No one noticed before that. Blocking of the offender took more than ideal due to (in this order), operator error, IPv6 => IPv4 fallback, unrelated bad puppet deploy.

It happened at a good time for most of the SRE people, performance team was also present in the IRC channels, we were able to diagnose and block the offending IP.

Multiple SREs, 1 SRE as incident coordinator and 2 people from performance.

https://github.com/wikimedia/puppet/commit/9b4dde717c7106d72dadf743d2b3d3eb70ed4f1c change to stop unconditionally caching 404s in the caching layer that exacerbate the problem