The Analytics AQS service is the backend for Analytics APIs like Pageviews, Unique Devices and more recently all the data to support the new Wikistats 2 website. In order to implement the edit API for Wikistat 2, AQS needs to query another service, Druid. Recurrent systemd timers on the Analytics Coordinator node (an-coord1001) drop old data from Druid to increase its efficiency and disk/memory space used on the hosts in which it runs (druid100[4-6]).

A systemd timer meant to clean up old MediaWiki history snapshots on Druid (the data needed by Wikistats 2) failed to run due to a change in the script that needed to be ran, since an argument was changed and puppet had not been updated accordingly. Luca merged https://gerrit.wikimedia.org/r/#/c/operations/puppet/+/517203/ to fix the systemd timer, and he manually restarted its service unit to force the timer to run in order to verify that everything was running fine. The old snapshots on Druid were deleted, but sadly this triggered an old Druid bug that we thought to have resolved, namely all Druid brokers locked up in some state without being able to respond to any query (https://phabricator.wikimedia.org/T220111). This in turn caused the AQS API to start responding 50x HTTP errors for all the API requests for Edit data, including the ones coming from the Wikistats 2 website. 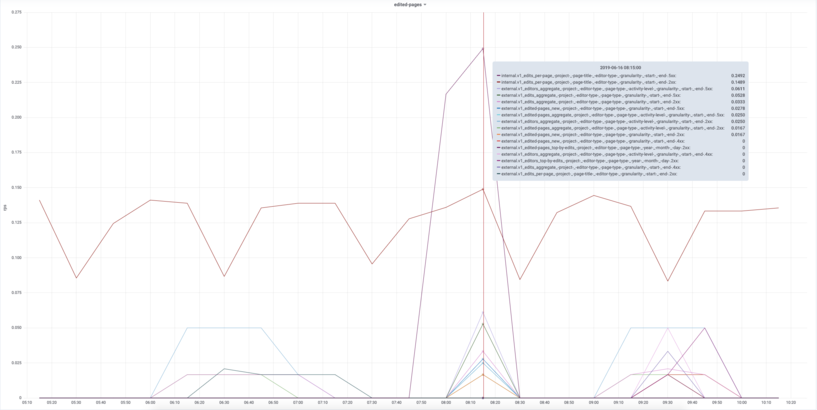 HTTP 50X impact during the outage. Since the AQS MediaWiki Edit history part of the API is low volume, the impact was minimal.

The AQS application level health checks for the edit API fired first, followed by the Pybal ones indicating that the LVS backend hosts behind druid-public-broker.svc.eqiad.wmnet were all down.

The monitoring of the AQS endpoint triggered the first alert few minutes after the outage started, so a manual intervention was quickly able to limit the damage and restore the functionality of the service.

This issue already happened in the past, but it was meant to be fixed by all the work done in https://phabricator.wikimedia.org/T220111. We thought that the issue was related to an aggressive data drop procedure, causing lag and timeouts in Druid and leading to this failure scenario. Our tests suggested that the issue was fixed, but it is clearly not the case.

Luca didn't follow any procedure (since there is none at the moment) to attempt to dump the status of a Druid broker before restarting it (for example via jstack etc..). This would have been extremely useful to identify a bug and report it to upstream.

The refinery-druid-drop-public-snapshots runs once every month, and its was meant to run on a Saturday during early EU morning, when usually people from the Analytics team are not around. It luckily broke, so when Luca restarted it he was able to fix the issue very quickly since he already knew how to solve it from his past experience. It would have probably caused a longer outage if the script executed correctly on Saturday (few SREs around, without a lot of knowledge of this particular failure scenario).

The AQS alarms were carrying the following wiki page: Services/Monitoring/aqs. It is difficult from a first read, if you are not familiar with the relationship between AQS and Druid, to figure out that part of the API relies on Druid to function properly. This needs to be addressed as action item.