Part of the rollout of mcrouter (T192370, T198239), is to configure MediaWiki to write to both nutcracker (the old Memcached proxy) and mcrouter (the new proxy). The abstraction layer used for this (MultiWriteBagOStuff) had two distinct problems that each caused a partial outage at different times.

Both issues had been seen before in testing and on Beta Cluster, and were already fixed in master and the group0 branch, but had not yet been back-ported to the group2 wmf branch.

Analysis in Logstash showed that entries in the log for type:mediawiki channel:exception were almost exclusively due to "Key contains invalid characters". As explained in the summary, this is due to MultiWriteBagOStuff not using the correct makeKey() implementation, allowing non-ASCII characters to remain unescaped and thus causing the MemcachedBagOStuff class to throw a fatal error.

Before investigating further, the first action was to revert the mcrouter deployment.

While non-ASCII characters are supported, they should be avoided if their origin is user input. This was fixed in SpamBlacklist by https://gerrit.wikimedia.org/r/444856 and deployed subsequently to help avoid future regressions.

The general issue of MultiWriteBagOStuff not using the correct makeKey() implementation was fixed shortly after by https://gerrit.wikimedia.org/r/#/c/mediawiki/core/+/442245/, and also deployed.

With this root cause found, fixed and deployed; the mcrouter deployment was unblocked and would be re-tried later that day (see below). 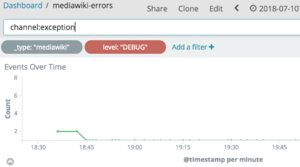 View of mediawiki-exceptions about the hour following the mcrouter deployment.

For the first hour following this deployment, MediaWiki service appeared to be fine, and there were no icinga alerts.

Looking directly at MediaWiki exceptions in Logstash (link) also showed no new exceptions, nor any increase in rate.

About 45 minutes after the deployment, Icinga reported an issue with one API app server. This didn't stand out in #wikimedia-operations given a fair amount of time had passed and people were now working on other things. 30 minutes later, Icinga reported dozens of more API servers having issues, as well end-user traffic from Varnish being affected.

At this point, Aaron and Timo started investigating.

The "Production Logging" dashboard showed a big increase in MediaWiki errors (not exceptions). From under 10 per minute normally, to 200 per minute. The error rate had been elevated since an hour earlier at 18:35 UTC (minutes after the deployment). Looking in Logstash for mediawiki-errors (permalink) revealed that the majority of these errors were tagged channel:memcached. Their rate was normally under 5 per minute, but increased to 200 per minute at 18:35, and increased again to ~800/min when the Icinga alerts started at 19:50.

The 10-minute burst of errors that started at 19:50, with 600 additional errors per minute, came from servers responding to "/w/api.php" (presumably API app servers). Mostly in the form "Memcached error for key "{memcached-key}" on server "{memcached-server}": SERVER ERROR". No one key or key group stood out, besides what appear to be generally more popular keys (not more likely to fail). Including "wikibase_shared/1_32_0-wmf_10-wikidatawiki-hhvm:CacheAwarePropertyInfoStore " (25%) various "WANCache:v:<key>:lock" keys.

The remaining 200/min were from snapshot1008 (this is where command-line scripts run to generate Dumps). All in the form "Memcached error for key "{memcached-key}" on server "{memcached-server}": SERVER HAS FAILED AND IS DISABLED UNTIL TIMED RETRY" for the same key: "WANCache:v:global:lag-times:1:db1071:1:lock".

Action: There should have been an alert for this increased error rate. That would've revealed the problem an hour earlier.

Question: It is unclear why Edit Count was affected. It is also unclear why it recovered within 10 minutes as no action was taken later.

After about 30 minutes into the investigation we realised that this may be related to an issue we found on Beta Cluster last week, which had been fixed in master and part of the 1.32.0-wmf.12 train deploy for this week (which had just gone to group0), but was not yet backported to 1.32.0-wmf.10.

The issue in question (T198280) was that the Memcached "add()" operations, commonly used for locks, would consistently fail (when using MultiWriteBagOStuff) for a seemingly random subset of cache keys (specifically, keys for which the hash ring of both Nutcracker and Mcrouter map to the same backend server).

This was made much worse by the fact that MultiWriteBagOStuff::merge() always used mergeViaLock (instead of mergeViaCas). Memcached add() is relatively rarely used by MediaWiki, but Memcached merge() is incredibly common because it is what WANObjectCache::set() uses internally for its lock keys. This is was fixed seen in Beta Cluster the week before, and already fixed in master with https://gerrit.wikimedia.org/r/442813. Back-porting this patch resolved the issue.

Deploying this immediately resulted in the MediaWiki error log rates going back from 200/min to under 10/min.