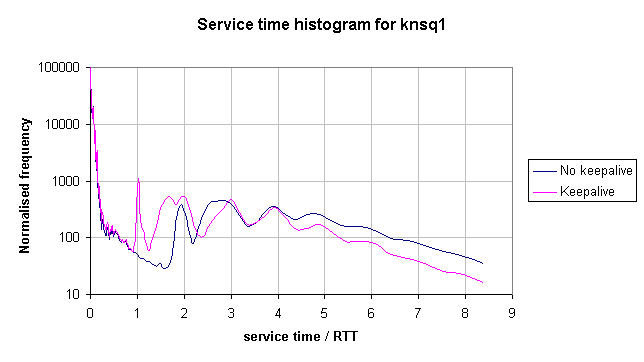 Service time histogram for knsq1, a knams text squid, showing the effect of enabling keepalive. The vertical scale is normalised so that the area under each curve is 1 million.

The data shows that a large number of misses have been offset by 1 RTT to the left, due to the lack of a connection setup time for those requests.

We had expected a speedup due to the larger TCP window on old persistent connections. This can perhaps be seen in the fact that the 1 RTT keepalive peak is larger than the 2 RTT non-keepalive peak, by a factor of 1.7 in terms of integrated count.

We could put a positive spin on this data by saying that the number of people experiencing request times of greater than 6 RTT (0.76 seconds), has dropped by almost half, from 691 per million to 355 per million. However, this is almost entirely explainable by the 1 RTT offset in the rapidly decaying tail.

The difference as perceived is probably better represented with a logarithmic horizontal scale. This gives a better idea of relative rather than absolute differences in time. 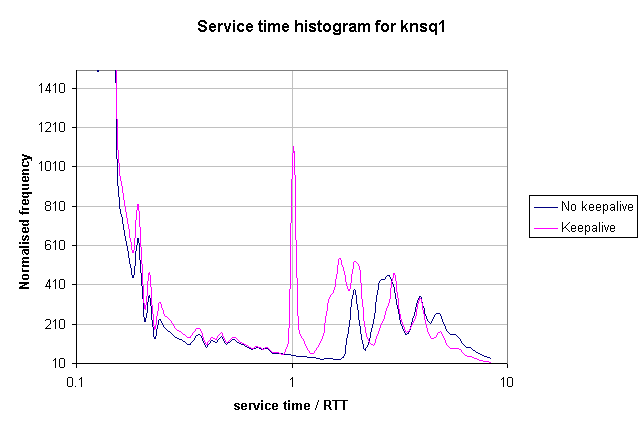 So all in all, it's not as great a difference as we had hoped, barely user-visible. Research will continue.

Click on a date/time to view the file as it appeared at that time.

You cannot overwrite this file.

There are no pages that use this file.