2012 development plans for a test suite for the dumps.

To browse source use the gerrit interface.

To check out a copy as a committer: git clone ssh://<user>@gerrit.wikimedia.org:29418/operations/dumps/test.git

To check out a copy as an anonymous user: git clone https://gerrit.wikimedia.org/r/p/operations/dumps/test.git

Basic usage of the test suite

Instead of many small tests, the test suite on purpose comes with a few bigger tests, as each run of xmldumps-backup does on it's own take ~1 minute without much data. Do the maths on your own, if we instead went for 10000+ small isolated tests ;)

directories. So you can easily test against older MediaWikis using those directories.

The big picture of xmldumps-test's working is depicted in the following schematic overview:

For each test, xmldumps-tests injects data into MySQL and prepares a LocalSettings.php as well as a configuration for xmldumps-backup. Afterwards, xmldumps-backup is started, which in term orchestrates mysqldump and MediaWiki to produce the dump. In the end xmldumps-test verifies the just produced dump against a pre-verified and known-good dump.

Failure simulation allows to control both the connections to the MySQL server and also writing to the permanent storage via nfs. The big picture for simulation is depicted by the following diagram:

Each of those failure simulation modules can be used

Failure simulation MySQL connections revolves around tunnelling tcp connections to the MySQL server and controlling this tunnel. Thereby, we gain full control over the connection, the data and it's flow back and forth. Each connection to the server can be controlled individually. So we can for example force reconnects on the database connection for external storage, while DB_MASTER and DB_SLAVE are left unaffected.

The choice for using a tcp tunnel comes with the downside that both MediaWiki and xmldumps-backup have to connect the MySQL server through tcp. As IPC connections would bypass the tunnel, they must no longer be used. However, all necessary rerouting is managed transparently by xmldumps-test itself.

The machines we want to test on will likely rely on nfs to access other servers. We must not interfere with those connections, but nfs does not allow to isolate connections.

However, typically no one mounts a local directory via nfs on the loopback interface.

We can exploit this fact to overcome the above limitations.

This approach adds some overhead and comes with some downsides, but is the only approach that reliably achieves the paramount goal of failure simulating nfs without affecting other nfs connections.

The following diagram depicts the tunnels and corresponding listening ports for a cluster with 3 nodes (i.e.: A master and 2 slave nodes). 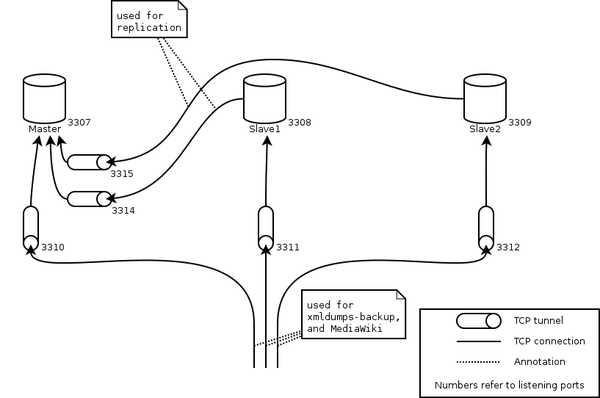