This page documents the traffic routing and caching infrastructure from a high level. It details which layers of the infrastructure exist in edge caching PoPs, which exist in core data centers, and how traffic flows through them. 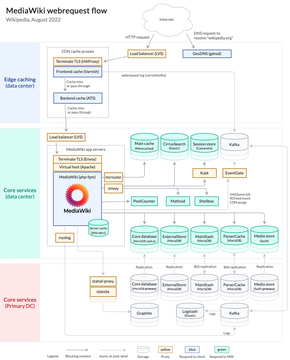 The backend layer is distributed by request hash (e.g. the URL and other metadata), and it is responsible for content capacity. Each server is assigned a subset of URLs, and thus together is able to hold a diverse and long-tail of HTTP responses.

As a single server cannot handle all end-user traffic for a single peak-popularity page, the frontend layer serves an important role ahead of the backend. The frontend is responsible for absorbing and coalescing concurrent requests for the same URL when it is absent from the cache, so that it only places minimal demand on the (one) backend assigned for that URL.

Refer to #History for earlier iterations of our caching software.

LVS distributes traffic to the edge frontend cluster powered by HAProxy and Varnish cache. As of June 2022, the frontend cache is capped to 1 day with a 7 day keep for benefit of HTTP-304 via IMS/INM (wikimedia-frontend.vcl).

Misses from the frontend are hashed to the edge backend cluster powered by ATS cache. Since April 2020, the ATS backend TTL is capped to 24 hours (T249627, trafficserver/backend.pp).

Misses from the backend are distributed to the MediaWiki app servers. Since July 2016, the Cache-Control max-age for page views is 14 days (T124954, $wgCdnMaxAge). Since May 2021, the wikitext parser cache retains entries for 21 days (change 685181, wgParserCacheExpireTime, wmf-config). 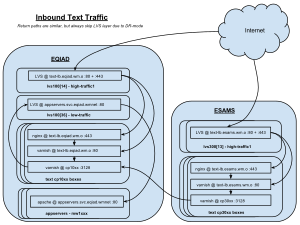 This diagram is for the "text" cache cluster but the traffic for "upload" operates similarly as well.

An overview of notable events and changes to our caching infrastructure.

In June 2022, the Purged service was introduced. MediaWiki no longer uses multicast HTCP purging, but instead produces Kafka events for purging URLs, which local Purged instances on Varnish and ATS servers consume and apply by producing local PURGE requests.

In April 2020, a year after switching from Varnish to ATS as cache backend, the TTL was re-enabled and lowered from the 7 days set in 2016, down to 24 hours (T249627). With Varnish frontend also at 1 day and a grace-keep of 7 days, this means frontend objects may outlive backend ones.

In 2019, we adopted the "ATS sandwhich" featuring Apache Traffic Server (ATS) as both TLS terminator and as backend cache, thus discontinuing Nginx- ("nginx minus") and Varnish backend. This changed the stack to:

It was explored to evolve the ATS-TLS layer to subsume the responsibilities of Varnish-frontend one day.

Prior to 2019, the stack for many years involved Nginx- for TLS termination and HTTP2, Varnish as frontend, and a second Varnish layer as cache backend. As such, in older documention "Varnish" might sometimes also refer to the cache backend.

Prior to 2019, we used Nginx- for TLS termination, Varnish as cache frontend, and a second Varnish layer for the backend cache. In older documentation "Varnish" thus might thus also be referring to the cache backend as well.

In 2016, we decreased the max object ttl in Varnish from the long-standing 31 days down to 1 day for Varnish frontends, and 14 days for Varnish backends and MediaWiki (T124954). The parser cache remains at 31 days.

Prevent white-washing of expired page-view HTML. Various static aspects of a page are not tracked or versions, as such, when the max-age expires, a If-Not-Modified must not return true after expiry even if the database entry of the wiki page was unchanged (T46570).