Replace the current AQS Restbase cluster with a more performant one. aqs100[123] nodes are replaced by aqs100[567], that are more performant and equipped with SSD disks.

Note: Please ask to analytics access to the spreadsheet with data if you want more info.

Requirements for the new cluster 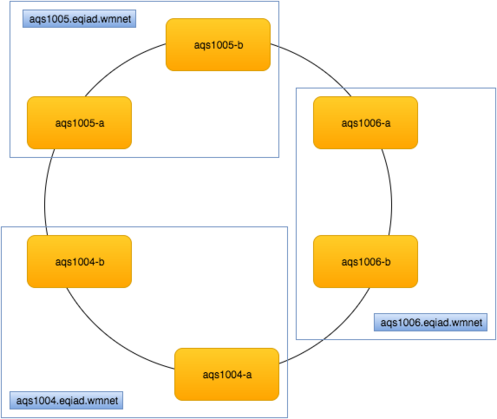 This configuration has been discussed in https://phabricator.wikimedia.org/T133785 by the Analytics and Services: Overview of the new disk layout of each AQS node.

Cassandra extends the concept of eventual consistency delegating to the client the choice of choosing the desired level of accuracy (Datastax docs). For example, with a replication factor of three and WRITE consistency set to QUORUM, a client requires at least the majority of the replicas to agree about a write before considering it done. A READ ONE consistency level returns the value of the quickest replica answering to a query. This is an important gotcha to properly evaluate the failure scenarios.

Another interesting read is about read repairs. Quoting the docs:

"When data is read to satisfy a query and return a result, all replicas are queried for the data needed. The first replica node receives a direct read request and supplies the full data. The other nodes contacted receive a digest request and return a digest, or hash of the data. A digest is requested because generally the hash is smaller than the data itself. A comparison of the digests allows the coordinator to return the most up-to-date data to the query. If the digests are the same for enough replicas to meet the consistency level, the data is returned. If the consistency level of the read query is ALL, the comparison must be completed before the results are returned; otherwise for all lower consistency levels, it is done in the background.

The coordinator compares the digests, and if a mismatch is discovered, a request for the full data is sent to the mismatched nodes. The most current data found in a full data comparison is used to reconcile any inconsistent data on other replicas."

Since we are using only RAID10 arrays, one disk failure will not cause any relevant issue or service degradation.

Three disk failures should not get the cluster in more trouble than the worst case scenarios for two disks failures.

There are other scenarios (combinations of the previous ones listed above) that would allow the cluster to run even with four disks failures.

We need to keep in mind that other kind of failures, like rack down, complete host breakage, etc.. could add up to one of the regular disks failure scenarios described above. One node down means two Cassandra instances down, so a combined failure would of course lower down the disks failure resiliency.

We have explored the possibility to use RAID0 arrays for each Cassandra instance, keeping RAID10 only for the root partitions. It would give us a lot more disk space available but it would also lower down the overall resiliency of the cluster (with two disks failures we could be in serious trouble).