If you did not measure it (well), it did not happen

This page describes how to measure performance such you can extract conclusions. It tries to list some common mistakes and techniques that can be applied to other kinds of data, too. Most examples revolve around network latency and assume JavaScript as the language with which measures are gathered. But many of the ideas and mathematical concepts can also be applied to, for example, rendering measures on the client or PHP latencies server-side.

Also, many of these ideas apply to any variable that you are measuring.

Average is the most commonly used statistic, but also the most commonly mis-used. A mean or average is calculated by adding all values of the set and dividing by the number of values. Calculated in this way, a mean is heavily influenced by outliers. 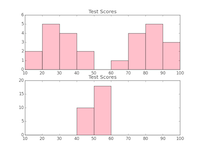 Lesson: To understand the distribution of your data, you need to plot it.

The statistic you probably want when talking about performance is the "median". A median is simple the median value on a dataset when sequenced from lowest to highest. Median and a percentile 50 are the same thing.

<add example of data series with salaries, see mean and median and which one represents distribution best>

We are all familiar with the normal distribution, but when looking at performance we look at latency values frequently and latency data is not normal. It's bimodal. Bimodal means that the distribution has two peaks. Mean, median and standard deviation values are of little use to describe such data. 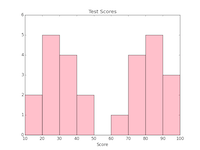 Separate modes in a data distribution can be caused by many factors. In the case of web network latency, these can be explained by cache hits and misses. That is why rather that just describing our latency data with a mean (percentile50) we need to look at the edges of the distribution, percentiles 90 and 99.

A percentile is the value on a dataset below which a specific percentage of values fall. Example: If we calculate percentiles on latency measures, a percentile 90 of 2.0 secs means that 90% of our users are seeing values below 2 secs (good!).

t-test is not meaningful

When comparing before and after results - like, say, latency data before you changed your site to HTTPS and after - be wary of using comparison methods like the t-test. These do not work well in "situations in which the control and treatment groups do not differ in mean, but only in some other way". [1]

Be wary of normalizing the distribution

A distribution of a variable x that is not normal can be "normalized" if we take log(x). We do not recommend to do this for latency data, as you are occluding important characteristics of the data, like the effect of caching on latency, which produces the modality.

Benchmark quality: Do you have enough data?

Example: We have daily measures of network latency using NavigationTiming or ResourceLoader APIs or User timing. We make some improvements or major changes in infrastructure, like reducing the size of JavaScript files, enabling HTTPS by default for all users or opening a new datacenter. We want to know how these changes affected performance.

It is crucial to have enough data to assess whether the change we made had some effect in performance. If the amount of data we have is to small, we might just be seeing the effect of random variations. Chance has an enormous influence and you might just be wasting your time trying to give meaning to random variations. “People expect that a sequence of events generated by a random process will represent the essential characteristics of that process even when the sequence is short.”[2]

How do we get enough data so our sample is statistically significant?

Statistical significance is somewhat of a dry topic, but there are rules of thumb that we can use. The advantage of performance testing is that in most instances we can sample as much data as we need and it is easy to sample repeatedly.

"Typically, it is fairly easy to add iterations to performance tests to increase the total number of measurements collected; the best way to ensure statistical significance is simply to collect additional data if there is any doubt about whether or not the collected data represents reality. Whenever possible, ensure that you obtain a sample size of at least 100 measurements from at least two independent tests."[3]

Although there is no strict rule about how to decide which results are statistically similar without complex equations that call for huge volumes of data that commercially driven software projects rarely have the time or resources to collect, the following is a reasonable approach to apply if there is doubt about the significance or reliability of data after evaluating two test executions where the data was expected to be similar. Compare results from at least five test executions and apply the rules of thumb below to determine whether or not test results are similar enough to be considered reliable: