In an effort toward privacy with regards to reader pageview data, we aim to sanitize the aggregate logs that we store long-term. There are two reasons for sanitizing the dataset. The first is to protect our users from having their browsing pattern reconstructed if somebody hacks our cluster. The second is to publicly release aggregated datasets on interesting dimensions (user agent and geography, to be precise) without risk for our users. The approach chosen to sanitize the dataset is to anonymize (set value to unknown) certain values on rows, when the row is subject to identification. This page summarizes and links to details about the Analytics Team approach, research and results on sanitizing the pageview_hourly dataset. Our analysis shows that the strategy we chose provides a strong level of resistance to attacks while still keeping a lot of value in our dataset.

As we found in our Identity reconstruction analysis, an attacker with access to our cluster could follow user browsing patterns by combining two datasets: pageview_hourly and webrequest. More precisely, users with a rare combination of values in various fields, especially user-agent and geographical location, are at risk of first being identified in the more raw webrequest dataset, and then followed in pageview_hourly. We only keep data in the webrequest dataset for a short period of time, but we would like to keep pageview_hourly indefinitely, and so we need to make it safe against this type of attack. .

An analysis of the potential decay of fingerprinting data (see this page for more details) shows that data getting old doesn't imply enough change among user information to prevent us from sanitizing.

Our team core mission is to try to release publicly as much data as we can. The pageview_hourly dataset is no exception, and we'd like to use it to provide more data to our users. However the sensitivity of the data it contains needs us to be very careful about how we publish it's content. This means:

See this page for a detail version of the algorithm we propose.

Very briefly, the idea is to group pageviews into buckets by sensitive fields, such as user agent and location. When these buckets have less than Kip disctinct IPs or less than Kpv distinct pages viewed, we anonymize one of the sensitive fields and repeat so that all possible buckets have more than Kip distinct IPs and more than Kpv distinct pages viewed. Fields with values that are unlikely to show up often are anonymized first.

We (the Analytics-Team) did a manual/qualitative review of browsing patterns over an hour with various distinct IPs, distinct pages and settings. Detailed data on exercise can be found on this dedicated page along with Hive code.

We want to anonymize the most rare values first, because they are the most identifying. We can establish the "rareness" of each value by looking at either hourly statistics or longer term, such as monthly statistics:

We decided as a team to use hourly statistics, for two reasons. One is technical computation resource, as statistics computation over a month would be very big, the other is data preservation, since using monthly statistics would mean anonymizing more data.

We used Shannon Entropy definition trying to measure how much information was lost in the process of anonymizing the pageview dataset.

For each fingerprinting dimension we computed entropy using the probability of a value (Pval) in the dimension as:

Entropy for the dimension was then computed using the formula:

An interesting point to notice is how to count unknown values in this definition. We have tried 3 methods:

Results have shown that the last method gives better result: more coherent in term of entropy definition, and providing a better view of how much data has been lost.

Finally, we have computed a global value of entropy for the dataset, using the formula: 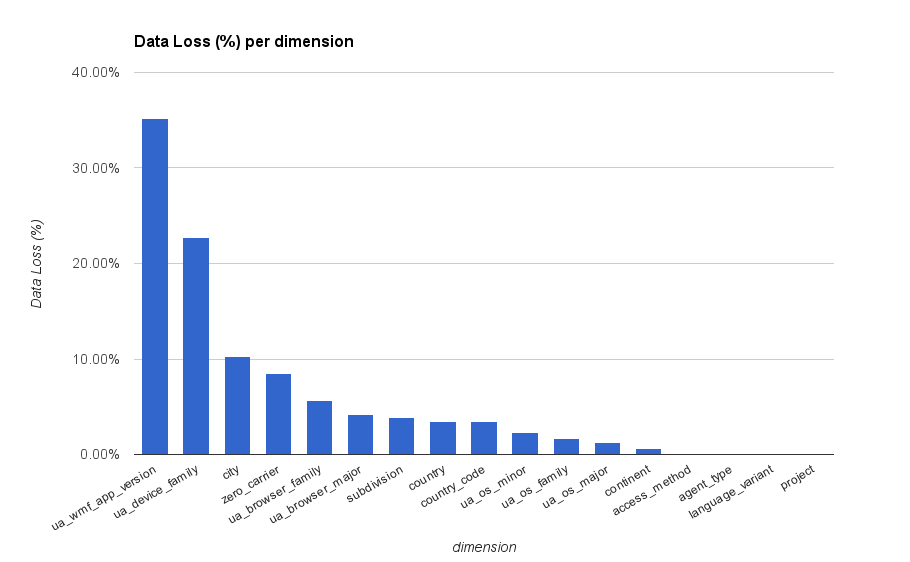 Tests realized over 3 hours at different time of the day (see next section for circadian patterns details): 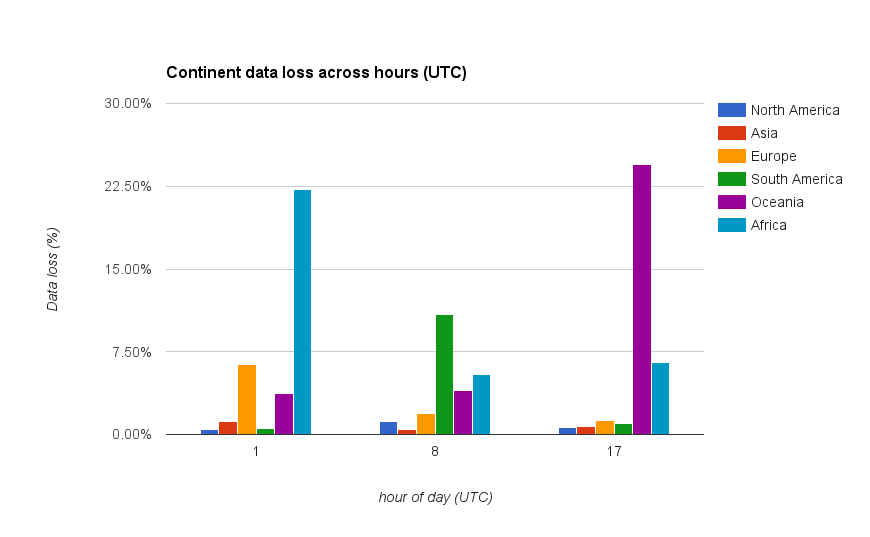